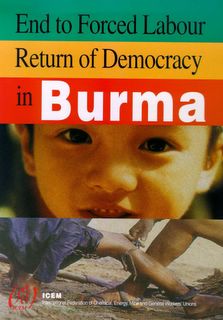 A new study puts Burma, one of the “6 outposts of tyranny” , ahead of the pack in the global forced labor standings:

Burma’s military government is at the head of the pack of Asian regimes perpetuating the use of forced labour, a new global report reveals.

The victims of Rangoon’s junta range from villagers forced to work on agricultural land confiscated by the military to those compelled to ”provide compulsory cash contributions, in addition to their labour,” the report released Wednesday by the International Labour Organisation (ILO) states.

”Forty-five persons from each village (in the western Rakhine State) had to work on gravel provision or bridge construction projects each day,” adds the report, ‘A global alliance against forced labour.’

The forms of forced labour that prevails mostly in the rural parts of that South-east Asian country also include men, women, children and the elderly being compelled by the army to porter for them, perform sentry duty and build and repair roads, according to the report. ”If villagers refuse to comply with orders, they can be subject to threats, imprisonment and violence.”

Such record of abuse by the junta is unparalleled in the world, officials from the Geneva-based U.N. labour agency said during the launch of the 87-page report, the second of its kind in four years.