HERE IS THE ALJAZEERA VIDEO OF POLITICAL EVENTS IN EGYPT

This video also shows the Egyptian Parliament passing a vote to allow multicandidate presidential elections. The sessions were even broadcast on TV which is unusual. It is interesting that Aljazeera has this footage since they were banned from the parliament sessions. It is no accident that they chose to post this video clip on their website today! 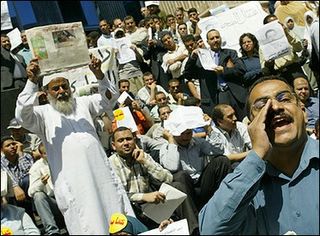 The Oppostion Protesting in Egypt

Egyptian judges yesterday voted to boycott the upcoming elections because of their displeasure with the pace of democratic reform:

While the judges met, hundreds of pro-government and opposition protesters faced off nearby. “Down, down with Hosni Mubarak!” chanted about 500 members of the opposition Kifaya movement gathered at the journalists union.

An equal number of demonstrators outside the union gates carried banners reading “Yes to Mubarak” and chanted, “Traitors, get out of here!” to the Kifaya members. Some threw stones at the union building.

Today, Hosni Mubarek came out against the protesters saying that they were “making the country unstable to invest in”…

Some pro-reform demonstrations sweeping Egypt could hurt its economy by prompting investors to flee, President Hosni Mubarak said in an interview published Saturday. The country’s longtime leader would not say whether he will run for re-election later this year.

Opposition leaders and pro-reform activists have staged protests in various Egyptian provinces to demand democratic changes, with some calling for an end to Mubarak’s 23-year rule.

“There is unemployment. Battling unemployment requires investment. With these demonstrations that we’re seeing, the investor will flee, meaning unemployment will spread,” Mubarak, 77, said in the interview with the Kuwaiti Al-Siyassah newspaper, a transcript of which was published by Egypt’s semiofficial Middle East News Agency.

“It’s obvious that the unjustified demonstrations have no program. They are staged just to create a state of unrest that drives out the foreign investor. There are those who want to hurt our economy, but they won’t succeed.”

Also… Robert Mayer at Publius Pundit wrote a more on the democratic movement in Egypt earlier this week here.