Publius Pundit has the details here.
Enough! has pictures of the violence here. 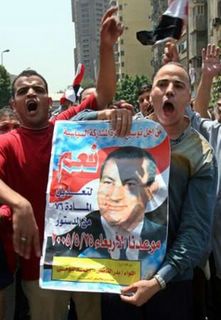 Egyptians went out to vote today for a referendum allowing multiparty candidate elections. But, the Opposition held rallies against the government anyway, saying that democratic reform was moving too slowly. Police ended up “escorting” a few of these protesters to jail:

Egypt holds a crucial referendum Wednesday on plans to hold multi-candidate presidential elections for the first time, with political tension running high over a wave of opposition arrests and calls for a boycott.

Pro-reform groups have called on supporters to stage nationwide protests on Wednesday as Egypt’s 32.5 million registered voters are called on to decide whether to back the controversial new electoral system.

The government of veteran President Hosni Mubarak says the constitutional change adopted by parliament two weeks ago is a step towards reform in a country still operating under a 24-year-old state of emergency.

Critics complain that the new law severely restricts independent candidates and overwhelmingly favours the ruling NDP of Mubarak, who in recent months has faced an unprecedented wave of pro-reform protests and calls to step down. 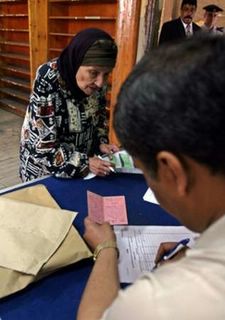 The Mubarak Government is cracking down on the Opposition today. Police arrested 15 Opposition leaders over their vocal attempts to encourage a boycott of today’s election:

Thirteen were nabbed in the Ismailiya governorate, northeast of Cairo, and the other two in the northern governorate of Kafr Sheikh.

They were accused of “distributing tracts, inciting Egyptian citizens to boycott the referendum”, police said Tuesday.

The latest arrest brought to almost 800 the number of Muslim Brothers rounded up by police in May alone — among them the organization’s second-in-command, Mahmud Ezzat.

The outlawed but normally tolerated Islamist group has staged to string of rallies in recent months asking for democratic changes from Egypt’s President Hosni Mubarak — after 24 years in office. 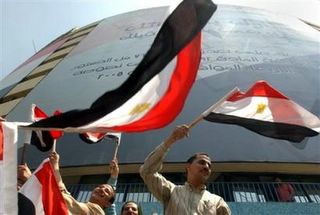 A protest by Kefaya was violently broken up by club wielding police:

Several Kefaya activists, including the group’s co-founders, were beaten up with sticks, some left with their mouths bleeding.

However, analysts believe that the situation is unlikely to escalate at this time:

A crackdown on Egypt’s Muslim Brotherhood has put the movement center stage as the government yields to demands for reform, but the conflict between the state and the Islamists is unlikely to escalate, analysts say.

The Brotherhood will take the blows in its stride and bide its time because its powerbase is secure, it knows it cannot outwit the vast Egyptian police force and resorting to violence would only play into government hands, the analysts said.

The balance of power has however shifted in the Brotherhood’s favor because the government faces a broad front of opposition forces demanding free and fair elections and an end to the emergency law which gives the authorities wide powers to detain opponents and restrict political activity.

The United States may also have strengthened the Brotherhood’s hand by suggesting it has abandoned the traditional U.S. preference for repressive secular governments in the Middle East over the Islamist alternatives.

Jim Hoft
EVEN DURING KILLER PANDEMIC Americans Favor Direction of Country Under Trump over Obama -- By Around 20 Points!
NOT GONNA HAPPEN: President Trump Tells Prince Harry and Meghan Markle US Will Not Pay for Their Full-Time Security After Move to LA
STUNNING! Pelosi Blames Trump for Coronavirus: After She Pushed Tourists to Visit Chinatown in Late February Weeks After Trump Bans China Flights
BREAKING: Dr. Fauci Tells CNN He Expects "Between 100,000 and 200,000" Coronavirus Deaths in US "Based on What We're Seeing" (VIDEO)
Good News! President Trump May Finally Have Control Over the Fed and Jerome Powell's Insane Economic Policies
See more...