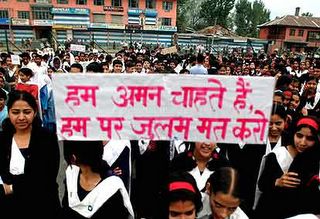 Children in Kashmir took to the streets in protest today after a grenade attack the day before left 2 dead and 44 wounded including 14 students:

“Please save me, I don’t want to die. Call my parents,” screamed a girl, her leg covered in blood, outside the school in Srinagar.

Distraught parents, many of them weeping, searched for their children at the scene of the blast in the centre of the main city of Kashmir where separatist rebels are waging a 15-year-old revolt against Indian rule.

“The grenade exploded as the schoolchildren were coming out of the gate of the school as it closed for the day,” a police officer told reporters.