POWERFUL VIDEO MADE BEFORE THE VIOLENCE STARTED HERE 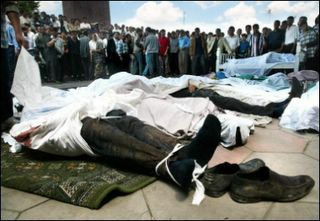 Hundreds are now reported dead from the violence yesterday in eastern Uzbekistan.

Death toll rises as thousands try to flee into Kyrgyzstan:

Thousands of terrified Uzbeks waiting to flee across the border into Kyrgyzstan stormed government buildings, torched police cars and attacked border guards Saturday in a second day of violence spawned by an uprising against the iron-fisted rule of U.S.-allied President Islam Karimov.

The Uzbek leader blamed Islamic extremists for the revolt and said his troops were forced to shoot demonstrators Friday as they tried to break through police lines. Witnesses counted more than 200 civilians dead.

The bodies were thrown into trucks and a bus and taken away:

About 300 corpses, including many women, were carried out from Andijan in trucks and a bus following a violent security crackdown, a member of the Apelyatsiya human rights group said.

“This morning I saw soldiers loading 300 bodies into three trucks and a bus in the street opposite the cinema,” Lutfula Shamsutdinov said from the eastern Uzbek city.

“Among the bodies were many women.”

Mr Shamsutdinov said he had watched from a house without being noticed.

The claim could not be immediately confirmed.

Today 15,000 protesters returned to the streets of the city, demanding the resignation of President Islam Karimov.

Israeli embassy officials are saying that the attack on their embassy yesterday was not related to the uprising:

Israel’s ambassador to Uzbekistan, Ami Mehl, told Haaretz that there haven’t been any Israelis or Jews casualties in the day’s violence.

Mehl also said that Friday’s foiled attack against the Israeli embassy in the capital, Taskkent, was not linked to the latest insurgency. 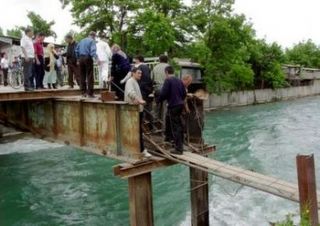 Uzbeks broke through a closed border crossing to Flee into Kyrgyyzstan.

Numerous eyewitnesses say soldiers fired on thousands of people who had gathered Friday in the main city square to support armed men who freed 23 local businessmen from jail where they have been held since February.

The government says the men belong to an outlawed Islamic organization in a country where only state-controlled religious activity is permitted.

But supporters of the men say the charges are an excuse to clamp down by a government that human rights groups say uses torture and arbitrary arrests against perceived opponents.

Townspeople also say the men run businesses which provide many jobs in the impoverished Ferghana Valley, a region that is known for its anti-government sentiment.

**So… is Uzbekistan following the same path as Kyrgyzstan? **

The apparently similar factors would prompt one to say “yes.” In particular, protestors in Andizhan called for the resignation of the incumbent president and the Cabinet similar echoing the streets in Bishkek and Osha. Some Andizhan residents say they came to the local square to support democracy rather than Islamic fundamentalists. That is where the similarity ends.

In contrast to Kyrgyzstan, the most liberal republic in Central Asia where the former opposition acted openly, Uzbekistan has an extremely rigid, centralized system of power. Opposition leaders were neutralized long ago, and the opposition works in the strictest secrecy. It is currently impotent. In contrast to the situation in Kyrgyzstan, it does not control the media, it does not have its own newspapers or any leverage against the current authorities.

On the other hand, Uzbekistan, like Tajikistan, is a state where Islamic factor plays an extremely important role. Here, in contrast to Kyrgyzstan and Kazakhstan, the revolutionary protest will be mainly led by the Islamic movement and under the slogans of Islamic democracy against the secular authoritarian regime… (more here )

**For more on Uzbekistan watch the Registan. Nathan has amzing eye-witness reports of the situation from contacts on the ground.**

Update: (3:00 PM) Soldiers are converging on protesters in the city of Ilychevsk:

Uzbek government troops are advancing on the city of Ilychevsk, where several hundred local residents seized administrative buildings on Saturday.

Sources on the Uzbek-Kyrgyz border told Itar-Tass that protesters are continuing their rally in the central square of the city on the Uzbek side. They have not put forth any political demands so far. There is no shooting in the city or on its outskirts.

The number of refugees on the Uzbek-Kyrgyz border is increasing. According to different reports, there are about 5,000 refugees in the area. About 600 of them broke though the Uzbek border guard lines near the Kyrgyz city of Dzhalal-Abad but were stopped by Kyrgyz border guards. Several hundred others crossed into Kyrgyzstan illegally.