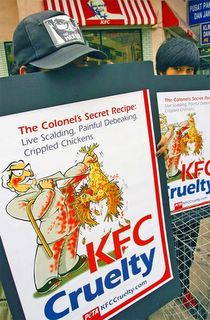 Just when The Colonel finally got over that “rat in the oven” rumor, the PETA activists are after him for his “debeaking” policy. He’s trying to silence their freedom of speech! People… he says he treats them humanely. But PETA insists that “he does chickens wrong”. I assume that they would rather do the humane thing and starve the little darlings to death. Do they want the butcher to go to sensitivity training? What?… They even have an Anti-KFC poultry… I mean poetry contest. I’m going to submit my own haiku. Here is goes:

…But the best is the article they have on the “Hidden Lives of Chickens” . What??? What are they, “closet chickens”? …But, maybe I did read something in the National Enquirer here, come to think of it.