You will feel comforted that our nation is in good hands after watching this video clip: 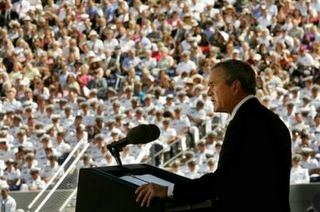 “Every midshipman I’ve spoken with is quite excited that the president is coming,” academy spokesman Judy Campbell said this morning. “It is quite an honor for the Brigade of Midshipmen, the faculty and staff to have the Commander in Chief at the graduation for the Class of 2005.”

Mr. Bush spoke Saturday at graduation ceremonies at Calvin College in western Michigan. He told the audience that the “public good depends on private character,” and the country depends on maintaining the traditions of volunteerism and community service. 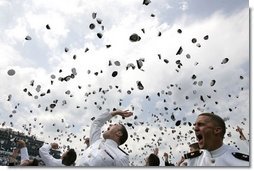 Selected segments of the president’s speech to the graduates:

…Thanks to the men and women of the United States military, our strategy is working — we are winning the war on terror. Since September 11, 2001, we’ve removed brutal regimes in Kabul and Baghdad that supported and harbored terrorists. We helped launch Afghanistan and Iraq on the path to lasting freedom by liberating over 50 million people. (Applause.) Both these nations have now chosen their leaders in free elections, and their courage is inspiring democratic reformers across the broader Middle East to rise up and claim their liberty…

…The best way to protect our citizens is to stay on the offensive. In the last few weeks, we’ve dealt the enemy a series of powerful blows. In Afghanistan, we brought to justice scores of terrorists and insurgents. In Pakistan, one of Osama Bin Laden’s senior terrorist leaders, a man named al-Libbi, was brought to justice. In Iraq, we captured two senior operatives of the terrorist Zarqawi. And in recent days, our forces have killed or captured hundreds of terrorists and insurgents in Baghdad and Western Iraq and near the Syrian border. Across the world, our military is standing directly between the American people and the worst dangers in the world, and Americans are grateful to have such brave defenders…

…Across Central Asia and the broader Middle East, we are seeing the rise of a new generation whose hearts burn for liberty, and they are going to have it. America is standing with these democratic reformers because we know that the only force powerful enough to stop the rise of tyranny and terror, and replace hatred with hope, is the force of human freedom.

Update: (2:00 PM) Lorie Byrd at Polipundit has linked to this great Bush speech… especially great on this Memorial Weekend.

Update 2: (4:00 PM) Thank God for the internet! The headlines from the MSM today all refer to the base closings part of the Commencement Speech Bush gave to the Naval Graduates. But, after listening for yourself, you can see and hear that there was much more to the address to the men and women in uniform. Glenn Reynolds, the Instapundit, and the great communicator himself, has linked to the Bush Speech so you can decide for yourself.