A grenade was thrown at the stage while Bush was speaking today: 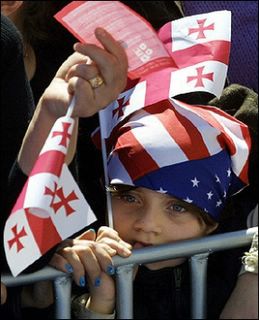 The Secret Service was investigating a report Tuesday that a hand grenade was thrown at the stage during President Bush’s speech in the former Soviet republic of Georgia.

After Bush left Georgia on Tuesday, the Secret Service was informed by Georgian authorities of a report that a device, possibly a hand grenade, had been thrown within 100 feet of the stage during Bush’s speech, hit someone in the crowd and fell to the ground, Secret Service spokesman Jonathan Cherry said.

According to the report, a Georgian security officer picked up the device and removed it from the area. The Secret Service had not seen the device as of Tuesday evening, Cherry said. It has agents in Tbilisi working with the FBI, State Department and Georgian authorities to investigate the report.

Georgian Interior Ministry spokesman Guram Donadze at first said no grenade was thrown close to Bush, calling it a lie, but later said the secretary of Georgia’s National Security Council, Gela Bezhuashvili, would make an announcement about the reports Wednesday.

While some countries may have poison issues, this is not the first time that a President in Georgia escaped an assassination attempt:

“This is the last act of terrorism in Georgia,” the bruised president kept repeating on the TV screen immediately after the 29 August 1995 assassination attempt. A remote-controlled explosion had left the president’s unprotected car in flames, and the entire nation in limbo. His survival was so miraculous that evil tongues spread slanderous stories, alleging that he staged the assault. He took action to cope with his major adversary, Jaba Ioseliani, the leader of the Mkhedrioni paramilitary faction, and the growing power of the criminal syndicates. Within a few months the main homebred troublemakers like Ioseliani and his deputy security chief, Temur Khachishvili, were in jail. The security chief, Igor Georgadze, a former KGB agent who was later denounced as the main plotter, was hiding out in Moscow.

In 1998 he survived a second assassination attempt:

The president of Georgia, Mr. Edward Shervardnadze has survived an assassination
attempt. His motorcade was fired upon by an unknown number of gunmen who also
used anti-tank weaponry to try to kill the president. Two presidential body
guards and a gunman were killed in the fighting. Initial reports from Tbilisi
suggested the possibility of the involvement of outside forces opposed to the
building of an oil export pipeline through the country.

But, although the last president Shevardnadze survived assassination attempts, his reign did not survive the “Rose Revolution” of the people:

In NOvember 2003, tens of thousands of Georgians thronged the streets of this Caucasus nation’s capital in jubilation Sunday after President Eduard Shevardnadze announced that he had quit.

Bowing to protesters who had stormed parliament declaring a “velvet revolution” or “revolution of the roses” and demanding that he leave, Mr. Shevardnadze signed a resignation letter. “I am going home,” he told the nation in a televised statement. When asked who would be the next president of Georgia, he said: “It is not my business.”

A former Soviet republic that aspires to join NATO and the European Union, Georgia has been in political turmoil for three weeks, following an allegedly fraudulent parliamentary vote.

Sunday, the protesters kept up the call for Shevardnadze’s departure, taking advantage of sunny weather to both join the demonstrations and celebrate St. George’s Day, honoring the patron saint of Georgia, who is often depicted slaying a dragon with a spear.

And, Russia was on the wrong side of history then as well:

Russian Foreign Minister Igor Ivanov had flown to Georgia overnight Saturday but announced Sunday, shortly before the resignation, that his mission was over.

In 2004, four men were arrested for an assassination attempt on the current president:

Georgia has detained four men on suspicion of plotting to assassinate the president, and authorities on Friday accused the autonomous province of Adzharia of being behind the alleged plot. The Adzharian leader rejected the accusation.
Deputy state security minister Gigi Ugulava said the arrests were made over nine days beginning March 23 and that two other suspects are at large and believed to be in the Adzharian capital, Batumi.

“A (Soviet-made) RPG-5 hand grenade was found at the square,” Gela Bezhuashvili, secretary of Georgia’s Security Council, said. It had been discovered 50 meters (160 feet) from where Bush stood, he said, but he gave no more precise details.

“It was not in working condition. In fact there was no chance it could explode. I think the aim was to scare people and attract attention,” he said.