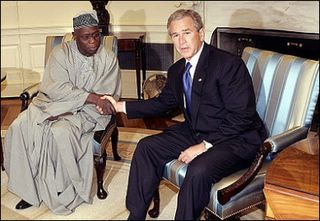 Bush with Nigerian President Olusegun Obasanjo this week in Washington.

President Bush welcomed Nigerian President Olusegun Obasanjo to the White House May 5, and the two leaders engaged in what Obasanjo later described as “a very fruitful discussion” concerning “the flashpoints in Africa and other areas where we are working together.”

The talks were expected to focus on a range of bilateral and regional issues, “including the situation in Sudan and our support for the efforts to expand the African Union mission in Darfur.”

Regarding Sudan, McClellan said the Bush administration has been “very supportive” of the African Union mission in the country, led by President Obasanjo, the organization’s current chairman. Obasanjo, he said, “is working to expand that mission and increase the number of peacekeepers who will be in the Darfur region, and that’s very important.”

The press secretary said the United States has been providing “the leading role” in addressing problems in Sudan, such as ending the suffering in Darfur, forging peace in the southern part of the country, and providing 80 percent of the food aid to Darfur for the current year.

“We have made some important progress in Sudan, but the violence must end in Darfur,” he said.

The presidents also discussed the exiled former leader of Liberia, Charles Taylor and oil prices among other things.