From the Battlefield of one of the “Six Outposts of Tyranny” …

Two Burmese Children Soldiers who defected to Karenni Opposition Forces in Burma have been describing chemical weapons used by the Myanmar forces:

According to the statement of the Christian organization, When asked about ‘chemical or poison’ weapons, Myo Min told CSW’s International President, Dr Martin Panter, that he had to carry boxes of chemical weapons to the front line almost from the day he arrived.

“Asked how he knew they were chemical weapons, he said that the sergeant showed them all around the arsenal where weapons were stored at the army base camp and pointed out these poisonous weapons. Each box had the emblem of a skull and cross bones on it, and he proceeded to draw one for us.”

Dr Martin Panter continued his report, “He said that whenever these chemical shells were fired soldiers had to wear full head masks and gloves. They were usually launched from a mortar launcher but said there were a number of ways in which they were delivered. But he had only seen the mortar launch, and said that during an artillery attack on Karenni positions they worked on one shell in four being a chemical shell. Sometimes he went with a truck to the front line when a large number of artillery shells were shifted at a time. In the truck on one occasion he counted five boxes of chemical devices, out of a total load of about 30, on another occasion he counted seven boxes, all with the skull and cross bones emblem.”

Soe Thu, also interviewed by Dr Panter, explained that the chemical shells were quite different to normal heavy artillery; they were lighter and painted a ‘white colour’.

Dr Panter reports: “He had sometimes picked one up to feel it, but was scared as the sergeant had said they could die if they dropped them and the chemical leaked out. He drew a picture of a chemical device and a mortar launcher next to it.”

The defectors told about what the regime said would happen to them if they defected:

Dr Panter reported that both boys said they had been told that if they ever deserted and went to the Karenni, they would be cut up, put on bamboo sticks across a fire, roasted and eaten “with salt”.

The two were interviewed separately. They know they will be summarily executed if they are caught and are currently being held at a secret location. 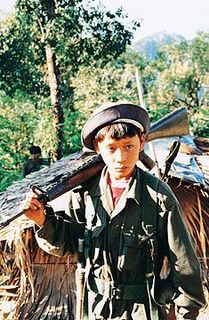 The two defecting children were not the only children of the comrades they left behind:

“Both boys told us that there were many other ‘children’ soldiers in their division. They thought around 30 kids of 16 years and younger, out of a total of 120,” added Dr Martin Panter

Both boys were dressed in their military uniforms, with their belts bearing the badge of the Burma Army insignia. Myo Min said he came from a village in the Irrawaddy delta area. In February, Burma Army troops came into his village, rounded up all the young lads and gave them a stark choice of either joining the army or going to prison for two years.

There are previous accusations of chemical wapon use by the regime:

Pressure on Asean is expected to grow after a UK-based international rights group, Christian Solidarity International (CSW), said Thursday the Burmese military may have used chemical weapons against Karen rebels near the border with Thailand last February.

The Karen are a mostly Christian agricultural hill tribe in eastern Burma on the frontier with Thailand, which has been fighting for decades for an independent state.

Martin Panter, the organisation’s international president, told both the BBC’s Today Programme and the Guardian newspaper that he had interviewed and examined five reported survivors of the February 15 assault on Karenni positions in Nya My, just over the border from the northern Thai town of Mae Hon Son.

During the shelling of a Karenni camp, Dr Panter has gathered reports that a device exploded which gave out yellow smoke and a “highly irritating odour”.