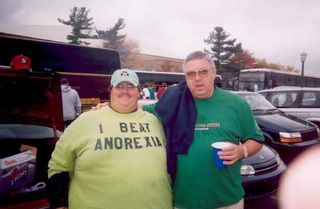 Tailgating Outside the Cannes Festival

The Same Film Festival that gave Michael Moore’s “Fahrenheit 911” a twenty minute standing ovation last year is aiming to avoid politics this year!… No kidding!… What a laugh!

When every Hollywood script either re-writes history to in some way make the US, corporations, or the Church the bad guys, (see Michael Medved ) and the UN, socialists, and secularists the good guys, that’s going to be a darn-near impossible task.

Hat Tip to Carter for the picture!