So, let me get this straight… You are mad because of “rumors” that the Koran was flushed, so you go burn a bunch of US Flags? Isn’t that the same type of behavior that you are protesting?

The Anti-US Rallies were organized for alleged Koran abuse… 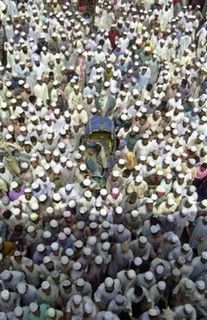 An Anti-US rally in Bangladash today.

The Muslim world came out to protest the United States today. The rallies from Indonesia to the Pakistan were organized in response to the Newsweek accusations of Koran abuse:

Shops, schools and banks were shut in Indian-administered Kashmir and women activists burnt a US flag in protest at reports of desecrations of the Koran at Guantanamo Bay, witnesses said.

The one-day strike in India’s only Muslim-majority state was called Friday by hardline separatist leader Syed Ali Geelani and backed by the revolt-hit region’s leading women’s separatist group, Dukhtaran-e-Milat or Daughters of Faith.

The protest forced the closure of shops, schools, banks as well as most government and private offices in Srinagar, the summer capital of Indian Kashmir.

The usually busy streets of Srinagar, the urban hub of Islamic militants opposed to Indian rule in the region, were largely free of traffic. 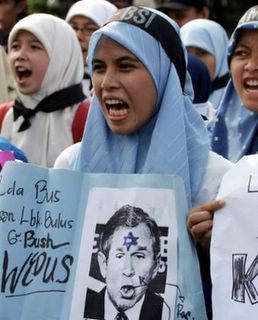 Bush with a Jewish Star at a protest in Jakarta Today.

Thousands of Pakistanis rallied across the country Friday to protest the alleged desecration of Islam’s holy book by interrogators at a U.S. military prison in Guantanamo, Bay, Cuba.

Smaller protests were also held in Malaysia and Kashmir.

The protest in this city, Pakistan’s capital, began in a tense atmosphere just hours after a bomb blast at a Muslim shrine killed at least 20 people at an annual celebration. The motive for the suspected suicide bombing was not immediately clear.

The protests also followed an admission Thursday by U.S. investigators of mishandling Islam’s holy book, the Quran. But officials claimed the mishandling was often inadvertent and denied the book was flushed down a toilet, as Newsweek magazine had claimed in a now-retracted report.

Burning the US flag in Kashmir today.

Protesters burned replicas of the flags of the United States and Israel in the Malaysian capital on Friday to show displeasure over reports of Americans desecrating the Koran.

The issue of whether personnel at a U.S. prison in Guantanamo Bay threw the Muslim holy book in a toilet has generated controversy globally in recent weeks, sparking violent protests in some Muslim nations and rioting in Afghanistan that killed 16.

In Kuala Lumpur, about 300 people shouted slogans and waved placards as they streamed out of a mosque soon after noon prayers and gathered outside the American embassy to listen to speeches condemning the incident.