Although, there have been successful political revolutions in former Soviet States in the last eighteen months, this is the first Russian Republic that has had a leader resign. 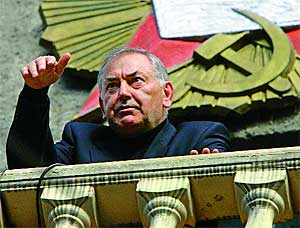 Dzasokov said that he was thinking about his resignation for some time:

Dzasokhov said he would be “setting a precedent” by becoming the country’s first regional leader to resign early rather than ask Putin to nominate him for another term. 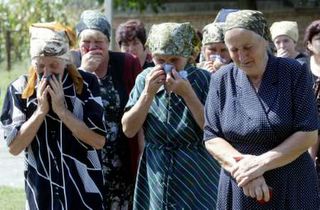 “Mothers of Beslan” a group of women who lost children at the school terrorist attack, petitioned Putin to remove Dzasokhov.

The “Mothers of Beslan” had some harsh words for Dzasokhov earlier in the year:

On February 17, the “Mothers of Beslan,” a group of women who lost their children in the hostage crisis in Beslan last September, petitioned Russian President Vladimir Putin to dismiss the president of North Ossetia, Alexander Dzasokhov.

The Beslan families told journalists that they had arrived in Moscow to personally deliver their letter to the Russian president. They believe the North Ossetian authorities failed to prevent the school siege and mishandled the crisis, resulting in the deaths of more than 300 adults and children.

“If the state could sacrifice the lives of our children, it can sacrifice the career of a single man,” declared Susanna Dudieva, chair of the Mothers of Beslan committee (Rosbalt, February, 17). She added that although Dzasokhov may have once had a distinguished career, he had also failed to meet their expectations in Beslan. “Since then, the children’s cemetery in Beslan has been his calling card,” Mrs. Dudieva said.

The influential “Committee of Beslan Mothers” joined with the Opposition to demand the president’s resignation in late March.

The Committee joined forces with the Opposition after a rally was blocked by the authorities:

The Committee of Beslan Mothers, CBM, has joined forces with North Ossetia’s main opposition movement to demand the resignation of President Alexander Dzasokhov.

The move came after the authorities took the decision – unprecedented in the North Caucasus – to block a peaceful demonstration called “Women Against Terror”, organised by the CBM, and scheduled for March 8 in the centre of Vladikavkaz.

Initially, the government reacted with a media campaign urging the public to stay away from the protest because of concerns over a possible attack by Islamic extremists. When this failed to dissuade the organisers, it moved to block the city’s main square to traffic and pedestrians.

** Also, Tuesday, the trial of the lone terrorist to survive the Beslan Massacre continued in Vladikavkaz, North Ossetia ** 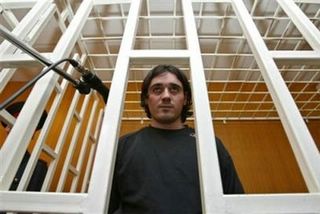 The trial of the lone surviving Beslan terrorist opened with the reading of a list of names of the dead:

Survivors of the Beslan school raid and relatives of the dead crammed into a courtroom Thursday to catch a glimpse of the only man to go on trial for the terror attack that ended in the deaths of more than 330 hostages, The Associated Press reported.

Nur-Pashi Kulayev, in a courtroom cage in which defendants sit in Russian trials, watched impassively as prosecutors opened the trial by reading a long list of victims and relatives and listing the charges of terrorism, murder and others.

“Everything they read today we saw with our own eyes,” said Lyudmila Dzegoyeva, 33, one of the more than 1,200 hostages who were held in a sweltering gymnasium at Beslan School No. 1 from Sept. 1-3, 2004, by more than 30 heavily armed militants.

The raid ended in a maelstrom of explosions, gunfire and frightened bloody children fleeing the mayhem. Officials say 31 of the militants were killed and 12 Russian servicemen and emergency workers also died.

Deputy Prosecutor General Nikolai Shepel read aloud from a dictionary-sized tome of charges and evidence, much of which prosecutors say was compiled from hundreds of eyewitness statements.

Prosecutors read a detailed chronology of the events leading up to and including the seizure, which came on the first day of classes of the new school year. They also listed in excruciating medical detail the injuries suffered by those wounded.

The “Mothers of Beslan” await a verdict.

Update: (June 1, AM) Glenn Reynolds, the Instapundit, is following this news. With the current instability in the region, we will see if Dzazokhov truly set the precedent in the weeks and months to come.

Update: (Thursday 6/2/05) An interesting article was written in RIA Novosti today about Dzasokhov’s resignation and the “prededent” he set:

The resignation of Alexander Dzasokhov from his post as president of North Ossetia created a political sensation in Russia.

Dzasokhov said in the presence of Dmitry Kozak, the president’s envoy in the Southern Federal District, that he had asked to Vladimir Putin to relieve him of his duties ahead of schedule. It is the first time that a regional head has resigned of his own free will amid public discontent…

…”Dzasokhov is a victim of circumstances created by the Beslan tragedy,” he said. “The people and the local elite groups no longer trust him.”

“Regrettably, this precedent will not become a rule soon. Ranking officials and politicians (in Russia) do not resign in recognition of the guilt of the state for major errors. The Kremlin had hinted to many leaders t
hat they should go – all in vain. It is said that Ruslan Aushev, the previous president of Ingushetia, was ‘encouraged’ to leave very forcibly, but to no avail.”

“We do not have a subconscious understanding of a leader’s personal responsibility, which is the case in Europe. I hope that Dzasokhov’s resignation is the first step toward this goal,” the political scientist concluded.