Laura Bush continued on her historic trip to the Middle East promoting Women’s Rights and Education to the troubled area.

HERE IS THE VIDEO CLIP OF HER WOMEN’S RIGHTS TOUR 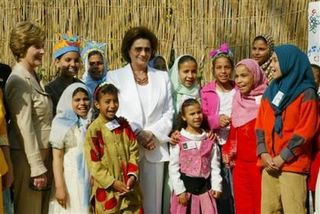 Laura Bush with Suzanne Mubarak
wife of President Hosni Mubarek and a group of school girls in Egypt.

Today Laura arrived in Egypt on her final leg of her 5 day tour:

US First Lady Laura Bush underscored the importance of literacy, especially for young women, while visiting Egypt on the final leg of a Middle East tour.

“Mrs Bush emphasized the importance of literacy and the role of women, especially young girls, in society,” a US embassy spokesman in Cairo told AFP.

On arrival, US President George W. Bush’s wife, who is a librarian by training, went to the presidential palace to pay a courtesy call on Suzanne Mubarak, the wife of Egyptian President Hosni Mubarak.

The two first ladies went on to record an episode of a television program for young children — Alam Simsim — which is the Arab equivalent of the US show Sesame Street and funded by the US government’s development arm USAID.

“She and Mrs Mubarak visited the set and then recorded a brief sequence on the importance of reading with Khokhah, a peach (colored) little Muppet girl,” the spokesman said.

He said the episode would probably air in the show’s next season.

The Literacy Rate for women in the Middle East is tragically low with less than half of adult women unable to read or write. 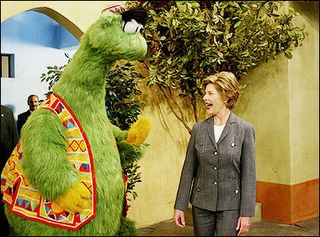 Laura Bush making a stop on the Egyptian set of “Sesame Street” with muppet “Khokhah”.

Laura Bush hailed the progress that Egypt has made and said that democracy will take time as it did for the US:

U.S. first lady Laura Bush stepped into Egyptian politics on the side of President Hosni Mubarak on Monday, commending his initiative in changing the constitution and saying political reform must happen slowly.

Egyptians will vote on Wednesday in a referendum on a constitutional amendment introducing the country’s first direct presidential elections with more than one candidate.

With a pyramid as her backdrop, she brushed aside criticism of long-serving Mubarak, saying he was “wise” to move slowly to change the system of choosing the president.

“You have to be slow as you do each of these steps,” she told reporters. “You know that each step is a small step, that you can’t be quick… I think he’s been very bold and wise to take the first step,” the first lady said.

Egyptian opposition groups say the step has not been bold enough and that change is too slow.

Laura also commented on the protest yesterday on her stop in Jerusalem:

First lady Laura Bush downplayed the hostile demonstrations she encountered Sunday while visiting some of Jerusalem’s most holy sites, saying Monday she was not afraid and did not feel she was at risk.

“There were literally a handful of protesters,” Bush said.

She said most of the people who were around her were members of the media.

Although the “hostile demonstration” stories have dominated teh airwaves, Laura kept the incidents in context:

“As we all know, this is a place of very high tensions and high emotions,” the first lady said while standing in the garden courtyard of the Church of the Resurrection. “And you can understand why when you see the people with a deep and sincere faith in their religion all living side by side.”

Mrs. Bush said the protesters who heckled her during Sunday’s visits to the Dome of the Rock and the Western Wall did not surprise her and she denied that they overshadowed her goodwill visit.