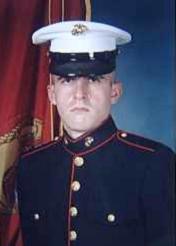 Mirza Bijedic recently returned to St. Louis from a Tour of Duty in Iraq. But, this was not his first experience with war. After a violent childhood in war torn Bosnia, Mirza and his family escaped and relocated to the St. Louis because of its large Bosnian Community. After a successful high school he decided to join the Marines as a way to repay his country, “I felt this would be the right way to give something back to the community for taking my family and my countrymen and accepting them here”.

He was stationed at Abu Ghraib prison after the incidents of abuse but was quick to add, “A couple individuals in the military. They don’t represent the whole United States or the whole armed forces.”

HERE IS A VIDEO CLIP OF AMERICAN & MARINE MIRZA BIJEDIC

This week Mirza and 80 others were honored with US Citizenship at a private ceremony at the St. Louis Court House.

Jim Hoft
Jim Hoft is the founder of The Gateway Pundit, one of the top conservative news outlets in America. Jim was awarded the Reed Irvine Accuracy in Media Award in 2013 and is the proud recipient of the Breitbart Award for Excellence in Online Journalism from the Americans for Prosperity Foundation in May 2016.
LEFTIST MOB RIOTS in Houston -- POLICE VEHICLE DESTROYED -- Police Out in Force
BREAKING: LEFTIST MOB RIOTS - WHITE HOUSE in Lockdown -- Liberal Mob Spraypaints "F**k Trump" On Walls
REVOLT! CNN Whips Leftists into a Frenzy -- Then Leftists Congregate Outside CNN Headquarters in Atlanta, Vandalize CNN Logo, Break Windows!! (VIDEO)
WTH? MN County Medical Examiner Finds "No Physical Findings that Support a Diagnosis of Traumatic Asphyxia or Strangulation" in George Floyd Death
"There are No Words Sufficient to Convey Our Disgust and Disdain" - Flynn Attorney Sidney Powell Releases Statement on Flynn Transcripts
See more...