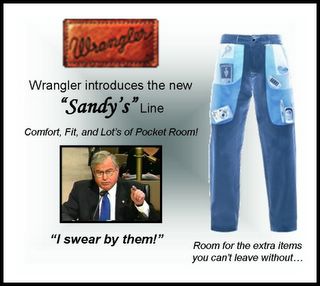 Sandy Berger, who was President Clinton’s top national security aide, pleaded guilty Friday to taking classified documents from the National Archives and cutting them up with scissors.

Rather than the “honest mistake” he described last summer, Berger acknowledged to U.S. Magistrate Deborah Robinson that he intentionally took and deliberately destroyed three copies of the same document dealing with terror threats during the 2000 millennium celebration.

So since when is it a misdemeanor to steal government documents and shred them?

So, could you imagine if Sandy would have been working for a Republican administration instead of working as Bill Clinton’s National Security Advisor?

Oh, how the democrats forget what they were saying last year when the story broke. From the Weekly Standard :

Some dismissed the story outright. “This is much ado about nothing,” said Dee Dee Myers, former Clinton mouthpiece. “The Republican hyperventilating is overdone,” pronounced the New York Times editorial page. Joe Lockhart, another ex-Clinton spokesman who briefly flacked for Berger, told reporters that his client felt “a sense of injustice that after building a reputation as a tireless defender of his country that many Republicans would try to assassinate his character to pursue their own ends.”

Others cast conspiratorial looks at the Bush White House. The Kerry campaign was deeply suspicious about “the timing of this leak.” Lanny Davis, who as Berger’s spinmeister may very well have leaked the news of Berger’s pilfering himself–an art form perfected by Clinton aides for heading off damaging stories–chimed in on the same theme: “It’s a week before the Democratic convention, and they know Kerry will get a bounce. They’re doing everything they can to try to undermine that bounce.” Ditto then-DNC chairman Terry McAuliffe: “The criminal investigation only came to light three days prior to the release of a report expected to be critical of the Bush administration’s lack of focus on the events leading up to the 9/11 attacks.” Likewise Hillary Clinton: “The timing speaks for itself,” she said.

Finally, there was the master of spin himself, Bill Clinton, who took a moment to comment on the Berger investigation during a book signing in Denver, Colorado, last July. “We were all laughing about it on the way over here,” said Clinton, “People who don’t know” Berger “might find it hard to believe” he’d make a mistake with classified materials. But “all of us who’ve been in his office have always found him buried beneath papers.”

Don’t hold your breath waiting for any reporters to notice that Berger’s Republican critics have been vindicated. As the Washington Post went out of its way to note, Berger “did not put it in his socks or underwear, as was alleged by some Republicans last summer.”