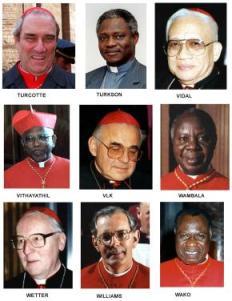 Will one of these men be the new Pope?

With the greatest growth in the Catholic Church coming in developing or third world countries, is one of the Cardinals from the represented areas ready to be Pope?

Nine of the 117 cardinals who will be taking part in the Vatican Conclave that will elect the next head of the Roman Catholic Church are seen in these file photos. From left top, Cardinals Jean-Claude Turcotte of Canada, Peter Kodowo Appiah Turkson of Ghana, Ricardo Jamin Vidal of the Philippines, Varkey Vithayathil of India, Miloslav Vlk of the Czech Republic, Emmanuel Wamala of Uganda, Friedrich Wetter of Germany, Thomas Stafford Williams of New Zealand and Gabriel Zubeir Wako of Sudan.