US Gets it Right with Madagascar 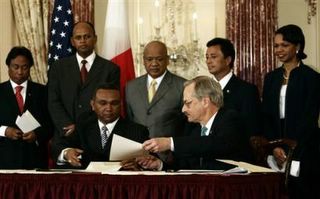 Marc Ravalomanana, next to Condoleezza Rice, at the signing of the Millennium Challenge Aid Agreement in Washington DC.

Instead of shuffling millions of financial aid to countries ruled by dictators, only to see it end up in Swiss Bank Accounts, the US policy today is to reward countries with aid for their commitment to democratic reform. The first country to receive aid for its economic and political reform through the Millennium Challenge Corporation is Madagascar. Marc Ravalomanana, the President of Madagscar, was in Washington to sign the aid package on April 18th.

Madagascar could be on its way to a brighter economic future after becoming the first recipient of a US aid initiative that rewards developing countries for their commitment to political and economic reforms.

A statement issued by the US state department on Monday said the funds would be used to tackle widespread rural poverty on the Indian Ocean island by focusing on property rights, the financial sector and agricultural business investment. 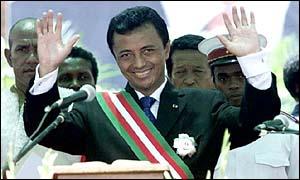 Ravalomanana had the following like that of a rock star during his presidential election cycle. He came from humble beginnings and is a self made millionaire. However, his ascension to office was not without conflict:

The government reported that in the election, Ravalomanana and Ratsiraka had both fallen short of the 50-percent majority needed for a clear victory. A runoff was scheduled for Feb. 24, but Ravalomanana protested, claiming that the government had rigged the results and that he had actually won 52 percent of the vote. “Various indicators since Dec. 16 show that Marc Ravalomanana won, but that a dark plot smothered the truth of the ballot boxes and robbed him of his victory. Reality or fantasy?” asked Adelson Razafy in the Madagascar Tribune.

President Ratsiraka was quick to seize on the fact that the general strikes of the opposition were costing the country up to US$14 million a day. His supporters fought back by blockading the capital. The political standoff brought international mediators to the country, including the secretary-general of the Organization of African Unity, who brokered an agreement to postpone the runoff.

“We must have Marc; the others have been here too long,” one protester said to the Sunday Independent (Feb. 3, 2002). “I ask you to be patient,” Ravalomanana told his supporters, according to a report in L’Express de Madagascar (Feb. 21).

But on Feb. 22, 2002 Ravalomanana ran out of patience and publicly declared himself president. At press time, President Ratsiraka had called a state of emergency.

He has been president since that time.