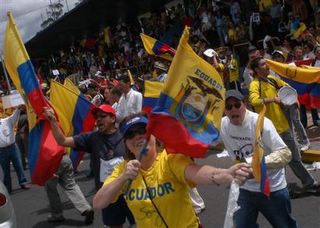 State of Emergency in Ecuador

Ecuador’s President Gutierrez has called off the state of emergency in hopes that things will quiet down in the country:

Ecuador’s president called off a state of emergency in the capital on Saturday — less than 24 hours after imposing it — as thousands of Ecuadoreans defied his ban on demonstrations and demanded his resignation.

Speaking on national television, President Lucio Gutierrez said he was annulling the decree he had imposed Friday night suspending civil liberties. He said he maintained his decision to dismiss the Supreme Court because public unrest over the selection of the judges in December had provoked the street marches.

“Little by little, tranquility is returning to the nation,” he said.

But things don’t look that way! 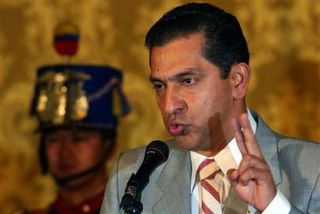 Gutierrez in his own “State of Emergency”

In Quito, the capital, residents took to the streets by the thousands, honking horns and banging pots and pans across the city.

The military, which under the state of emergency was charged with maintaining public order, was not evident during the peaceful demonstration, which was punctuated by shouts of “Lucio Out!” and “Democracy yes, dictatorship, no!”

“We’re not to going to pay any attention. Let him take his emergency decree and go to another country,” said Teresa Arteaga, one of the protesters.

Gutierrez — a cashiered army colonel elected in 2002 — imposed the emergency after three days of street marches demanding his resignation. He said the unpopular Supreme Court judges — who were appointed by his congressional allies in December in a process widely viewed as unconstitutional — were the cause of the protests.

“The president has gone crazy. He doesn’t even want us to protest. Declaring a state of emergency is incredible,” Roberto Freire, a 40-year-old engineer, said as he shopped at an open-air market.

The unrest was sparked by a government attempt last year to restructure the Supreme Court.

The state of emergency empowers the Ecuadorian government to take extraordinary measures to quell unrest.

Up to 10,000 people have been protesting in the streets of Quito since Thursday, banging pans and demanding the president’s resignation.

The Armed Forces Commander had explained the necessity of the state of emergency just yesterday:

Armed Forces commander Victor Hugo Rosero appeared on television on Saturday and said the state of emergency, which allows security forces to restrict the right of assembly and free expression, was needed to end days of disorder.

“The security forces will only act when necessary,” Rosero said in a show of support for the president from the military, the unstable nation’s traditional arbiter of power.

The decrees came after several days of loud but peaceful protests in Quito. It was the second time Ecuador’s Supreme Court has been fired since December, when a short-lived pro-government congressional majority dismissed an earlier court at the behest of Gutierrez, who argued it was biased against him. 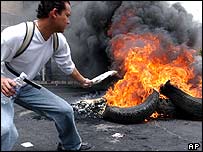 A Week of Protests

Kofi has weighed in on the situation:

UNITED Nations Secretary General Kofi Annan has expressed concern at the situation in Ecuador, where unrest has led President Lucio Gutierrez to declare a state of emergency in the capital.

“The Secretary General is following with concern the latest developments in Ecuador,” his spokesman Fred Eckhard said.

“The present crisis may aggravate an already unstable situation.”

He said Mr Annan “calls on the Government and the Opposition to find a constitutional solution to the crisis through dialogue”.

“He urges all Ecuadorians to maintain a peaceful and constructive attitude.”

Update: (11:00 AM) Glenn Reynolds at Instapundit has linked to this post and A. M. Mora Y Leon at Publius Pundit has a great analysis of the situation in the South American country.