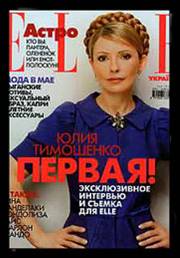 The China Daily reports that this month Ukrainian Prime Minister Yulia Tymoshenko has appeared on the front cover of Elle magazine in Ukraine posing in a designer dress.

Mrs Tymoshenko played a key role in the “Orange Revolution”, her plait hairdo making her a distinctive figure.

Interviewed by Elle Ukraine, she said she was making full use of her looks in the male-dominated world of politics.

Mrs Tymoshenko told Elle that her looks were all natural as she had no time for beauty treatments.

“I am going to disappoint your readers but I am not doing anything special for my appearance. After working 16 hours a day, all I have time for is sleep,” the Ukrainian politician said.