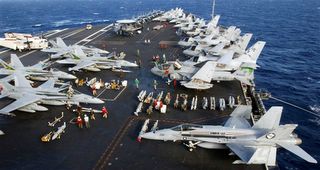 Athena posted a bit on the man who was found on board the USS Harry S. Truman while it docked in England. I had postd about this earlier here. A friend of mine serving on the Truman had written me about the story. Apparently, this man was not through with his sightseeing:

A man who managed to get on board a US aircraft carrier has been arrested again attempting to enter a naval base less than 24 hours after being made subject to an anti-social behaviour order banning him from entering prohibited areas.

Under the terms of the order Abdoul Masmoud Yessoufou was banned yesterday from entering non-public areas of Portsmouth Naval Base after he was caught on board the USS Harry S Truman on Saturday.

But at 8.52am today, the 37-year-old from Newport, Isle of Wight, was arrested as he attempted to enter a gate at Portsmouth Naval Base.

A Royal Navy spokesman said: “MOD police arrested a 37-year-old man at an entrance to Portsmouth Naval Base on suspicion of breaching an Asbo.

The court heard that Yessoufou had previously been convicted of entering airside areas at Heathrow on three occasions in February this year and on another occasion at Southampton airport.

I wanted to dismiss this story originally on the assumption that he was just crazy. But, the fact that he has an inclination to break into restricted areas at airports and shipyards makes me think twice.

My thanks to Navy Specialist Sha’ron Evans, YN2(VS22) on the USS Harry S. Truman for the photo and to all of those individuals bravely serving in our military.