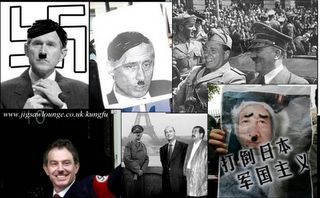 From New York to Rome to Paris to Shanghai, Hitler is making the rounds. It’s hard to miss his trademark mustache parading from protest to protest across the globe.

Today the world collectively agrees that Hitler was a horribly evil man. This is witnessed by his common street appearances. You’re seeing him in New York City on a “Bushitler’ sign, to Shanghai in the Far East, on a “Koizumi face”.

Funny, how it is not the Mugabe face in a Zimbabwean protest that has a swastika behind it, or the Khatami face in an Iranian protest with the clench, raised fist, or the Assad face in a Syrian protest that carries the trademark slash mustache. It is in the Western Societies who allow the free expression of speech where we see these ‘Hitler-esque’ features defiling the faces of democratically elected men.**

Victor Davis Hanson wrote about this phenomenon in one of his latest columns:

The flood of the Hitler similes is also a sign of the extremism of the times. If there was an era when the extreme Right was more likely to slander a liberal as a communist than a leftist was to smear a conservative as a fascist, those days are long past. True, Bill Clinton brought the deductive haters out of the woodwork, but for all their cruel caricature, few compared him to a mass-murdering Mao or Stalin for his embrace of tax hikes and more government. “Slick Willie” was not quite “Adolf Hitler” or “Joseph Stalin.”

But something has gone terribly wrong with a mainstream Left that tolerates a climate where the next logical slur easily devolves into Hitlerian invective. The problem is not just the usual excesses of pundits and celebrities (e.g., Jonathan Chait’s embarrassing rant in the New Republic on why “I hate George W. Bush” or Garrison Keillor’s infantile slurs about Bush’s Republicans: “brown shirts in pinstripes”), but also supposedly responsible officials of the opposition such as former Sen. John Glenn, who said of the Bush agenda: “It’s the old Hitler business.”

Thus, if former Democratic presidential candidate Al Gore breezily castigates Bush’s Internet supporters as “digital brownshirts”; if current Democratic-party chairman Howard Dean says publicly, “I hate the Republicans and everything they stand for” — or, “This is a struggle of good and evil. And we’re the good”; or if NAACP chairman Julian Bond screams of the Bush administration that “Their idea of equal rights is the American flag and the Confederate swastika flying side by side,” the bar of public dissent has so fallen that it is easy to descend a tad closer to the bottom to compare a horrific killer to an American president.

Truly, as VDH notes, it is disconcerting that so many on the left have spewed imagery of Hitler to attack their opponents on the Right. This is happening because as VDH points out, Hitler was the great evil extreme of their opposition. (And, Saddam will most likely be the next to join him.) But you won’t see Mao or “Uncle Joe” at any of these rallies, not just because the communist parties here and abroad were paying for many of the world’s protests of late, but also because Mao and Stalin reflect the great evil extreme on their side of the pond. And as Victor Hanson explains, there’s some pretty putrid water in their wading areas.

Also as VDH explains, there is this extreme invective coming from the Left as they see their dominance in social policy come to an almost shameful end. Even as the MSM preaches the Left’s ideology, there is not enough people in today’s American society anyway to buy into the “Village Concept” taught by the “Village People”. The red-blooded cowboys in America don’t feel like taking care of anyone who won’t care for themselves. And, the soft socialist policies of western Europe keep proving their ineffectiveness. So when Kofi or his minions at the corrupt UN demand a “world tax” and in the next breath call the West “stingy”, they move a step away from the people who are tired of their begging and ingratitude.

You can bet that Hillary Clinton is well aware of the mistake she made in San Francisco in June of 2004, when she proclaimed…

“Many of you are well enough off that … the tax cuts may have helped you,” Sen. Clinton said. “We’re saying that for America to get back on track, we’re probably going to cut that short and not give it to you. We’re going to take things away from you on behalf of the common good.”

(So much for the moderate democrat image thing!)

Hillary may be peddling this, but most Americans aren’t buying! These policies don’t sell too well to a two parent household working two full time jobs and trying to raise a family. And, this, of course, enrages the minions on the Left. So much so that they resort to make believe (because they really do believe it) that the modern day rulers from Bush to Berlusconi are reincarnations of Adolf Hitler.

But here’s the breaking point for the ‘New /Old-Left’. It isn’t working! No matter how loud you get, how infuriated you become, how many “peace Candle Vigils” you light, how many people you talk over, it still isn’t working.

people saw men dancing together in the streets of Kurdish Iraq on election day, and…

people witnessed the man walking miles on crutches to cast his vote in a new democracy… It was then and there that people knew. It was then and there that things forever changed. People knew in their gut that this was not a ‘Hitler’ who had made this possible, but a coalition of men and women representing Bush’s America, and Blair’s Britain, and Berlusconi’s Italy, and Koizumi’s Japan, who made this extremely good thing happen.

And the tide continues…

* pictures taken from different protests around the world.
** interesting to see that even Russia today, with doubts on the seriousness of its democracy efforts, sees protesters with Putin-Hitler signs. In China, of course, it is OK to carry a Japanese Hitler-Koizumi sign, but you won’t see a Hitler-Jintao sign anytime soon.

Update: (3:00 PM) Lorie Byrd from the daily read, Poipundit and Byrd Droppings has linked to this Bushitlerian post.