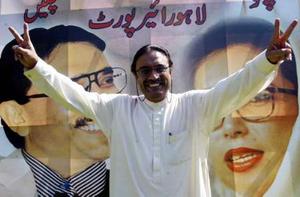 **Police detained Zardari’s Aides when his Flight Landed in Lahore, Pakistan this Morning. Protesters Continue to Scuffle with Police.** 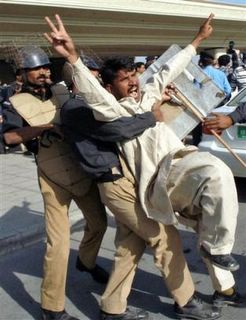 Protester Flashes a “V” for Victory before being Hauled Off 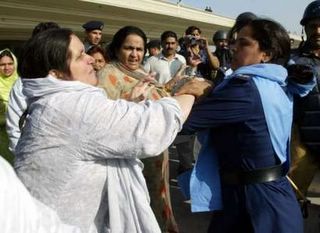 A Group of Women Fight with the the Female Police 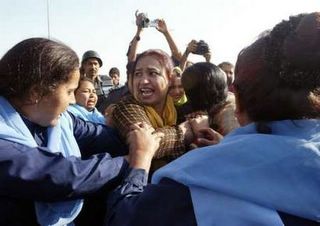 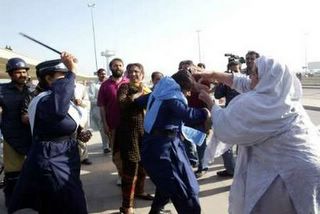 Female Police Officers being Attacked by Mob of Zardari Protesters

The Geo TV channel, which had a correspondent travelling on the plane from Dubai with Asif Ali Zardari, which landed in the eastern city of Lahore early in the morning, said it was not immediately clear whether Zardari himself had been detained. 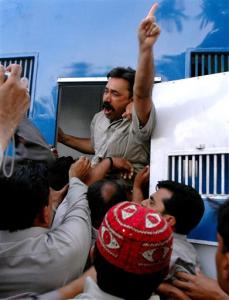 Police Round Up PPP Activists

Zardari spoke by phone earlier today to reporters (as reported in The Nation):

Addressing the press conference he said the PPP would not close doors of dialogue and would avoid the policy of confrontation. He said the PPP was committed to restoration of democracy in the country and it was only to PPP’s credit that it fought against every military dictator. He said the party was ready for a dialogue but that did not mean it would end its struggle for the restoration of democracy in its true spirit.

He said he would come at all costs and would fight for the just cause on the roads along with the party workers. He admitted the government had established contacts with the party leadership. He lauded the efforts of his party workers, saying they had made sacrifices for democracy and the future of Pakistani people.

Asif Zardari asked the government officials not to become party in the case, as the political forces always shunned their differences and the responsibility of torturing and arresting the workers would be on the government.

To another question he said the party would carry on with the rally and go to Data Darbar at all costs. To another question, he said he had spent 11 years in jail and was ready to go again if the government arrested him.

He said the whole world had become a family now and the media was exposing every act of the government. Arresting the workers and putting them behind bars would not earn the country a good reputation. 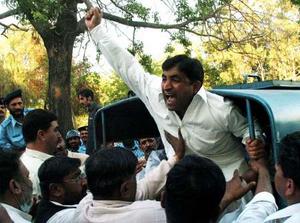 The PPP are claiming thousands of arrests in Lahore, Islamabad amd Karachi:

The PPP claimed that over 50,000 activists were arrested all over the country and the army had been deployed in Sindh to block the super highway. The party said the police sealed its offices in Lahore, Islamabad and Karachi and a heavy police contingent had been sent to Bilawal House Lahore, which arrested dozens of party leaders.

Addressing a news conference at Bilawal House, International Media Committee coordinator MNA Sherry Rehman said, “The government has declared Punjab a no-go area for PPP Sindh’s activists and have blocked all caravans leading to Lahore.” She claimed that over 25,000 activists had been arrested in Sindh and Punjab, adding that police had also arrested hundreds of female activists. 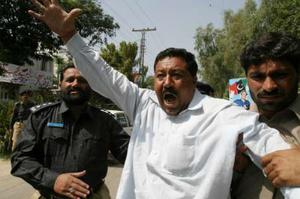 Sindh, Punjab and Balochistan police arrested tens of thousands Pakistan People’s Party activists, continuing the government’s crackdown on Friday. The activists were on their way to Lahore airport to welcome Asif Ali Zardari, spouse of the former Prime Minister Benazir Bhutto. Zardari is scheduled to arrive in Lahore today. 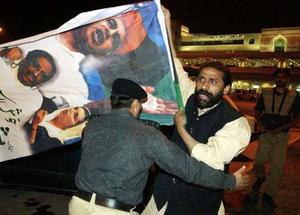 Interior Minister says that all went well for Zardari arrival:

Commenting on the reports of Zardari’s arrest, Federal Minister for Information Shaikh Rashid has denied the arrest and said that he has been reached home. Few people reached at the airport while Lahore remained peaceful, he said. No one has been arrested and those tried to create obstacles on the roads would be released.

Shaikh Rashid gave credit to Government of Punjab for tackling the situation in an organized manner because the government would not allow destroying peaceful environment. Politics have some codes of conduct, Zardari has gained what the wanted from the media, now he is in Pakistan and free to visit anywhere including Data Darbar.

Former Prime Minister and wife of Zardari, Banazir Bhutto spoke out against the government’s PPP arrests:

Benazir Bhutto, former prime minister and chairperson of the Pakistan People’s Party, has condemned the arrest of PPP MNA Samina Gurkhi, former MNA Shahnaz Javed and thousands of party activists throughout the country in an attempt to stop them from welcoming Asif Ali Zardari on Saturday.