Here is a description of how “The Help” was treated in a 2001 charge filed against Princess Buniah al-Saud:

Neighbors called 911 Friday after Ismiyati, 36, ran crying from the apartment she shared with the princess. She told deputies al-Saud beat her, hit her head against a wall and pushed her down a flight of stairs, leaving her unable to walk.

“When we talked to her (Ismiyati) through an Indonesian interpreter and saw the extent of her injuries, we upgraded the charges to a felony,” Stewart said.

On a 911 tape released by the sheriff’s office, Ismiyati can be heard crying hysterically in the background while a neighbor talks to a dispatcher.

“Help me. Help me. The boss pushed me down the stairs,” Ismiyati told the dispatcher through an Indonesian translator on the telephone.

Ismiyati was treated at a hospital and released, but she was bruised badly and is walking with a cane, Sgt. Ken Mohler said.

In addition to cooking, cleaning and laundering clothes, Ismiyati Memet Suryono said she stayed by Princess Buniah al-Saud 24 hours a day. She stood at the shower to open and close the curtain when the princess bathed, she said, and was not allowed to close her bedroom door at night in case the princess needed her. 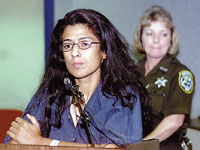 In another account of the incident in 2001, the servant, Soryono, said the abuse started when they moved to the US:

When Buniah, 41, arrived there last March to study at the University of Central Florida, she brought Soryono, 36, as her personal servant. In Saudi Arabia she had never hit her but, claimed Soryono, this changed in Florida. She says she was slapped for minor misdemeanours – such as walking in front of the princess while they were shopping. 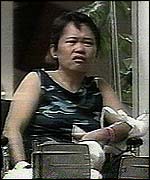 Ismiyati was treated and released.

She said she was seldom paid her small salary of $200 a month and that the princess threatened to have her jailed when they returned to Saudi Arabia. One day last December Soryono tried to assert her rights. We are in America now, she told her employer.

The princess told her she could treat her how she liked because she was a member of the Saudi royal family with a diplomatic passport. Soryono answered back. And then, she claims, the princess reached out with two hands and pushed her. She fell backwards down the stairs, hitting her head and injuring a knee. She ran to a neighbour’s house and asked them to ring the police.

The princess was fined $1,000 and put on probation for the crime.

This was the second time a Saudi Princess was accused of servant abuse:

In 1995, Princess Maha al-Sudairi, wife of the heir to the throne, pummeled her driver, a man named Hamada whom she suspected of taking $200,000.

When al-Sudairi found out about the missing money, she threw a vase or potted plant at Hamada and then screamed and hit him, investigators said.

Deputies working off-duty at the time watched as the princess removed a sandal and beat Hamada, then punched him. The deputies did not report the battery.

Hamada later confessed to taking the money, and several deputies were disciplined in the incident.

Maha al-Sudairi was later appointed as consulate at the Arab-French Chamber of Commerce:

Maha pointed out that she will work at establishing institutes in hospitality and the arts in addition to introducing French pastry restaurants to the Saudi markets.

In March of this year another Saudi Princess living in Winchester, MA, was also accused of servant abuse. According to authorities:

A Saudi Arabian princess living in Winchester was arrested yesterday on federal charges of enslaving two Indonesian women to care for her wheelchair-bound prince and unruly sons who allegedly spit on the servants.

Federal prosecutors claim Jader threatened her maids, identified in court papers as “Tri” and “Ro,” with “serious harm or physical restraint” if they did not obey, and she paid each woman $75 per week while telling immigration officials they earned $375 per week.

Neighbors told the Herald the two maids wore mint green smocks and were spit upon by Jader’s five sons, who would arrive home from school and toss their backpacks in the garden for “Tri” and “Ro” to fetch. The children are 11 and older. 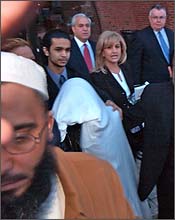 “I asked them, `Why do you treat them so bad?’ And they said because they are women,” one neighbor said.

Princess Hana F. Al Jader was released on $1 million bond after her arrest and a court appearance:

A Saudi Arabian princess accused of forcing two Indonesian women to work as her servants in Winchester wiped tears from her face after a federal magistrate released her on a $1 million bond yesterday to care for her sick husband and six children.

The Princess pleaded not guilty.

Update: (About Noon) Michelle Malkin is linking to this “Little Princess” post in her “When Saudi Princesses Attack” posting.