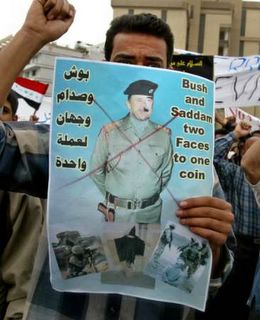 A huge rally staged by infamous anti-American Muslim Cleric Moktada al-Sadr (remember him?) took place in the streets of Baghdad today on the second anniversary of the fall of Saddam. The “Democratic Underground” internet site had the scoop on the parade (linked to by Little Green Footballs) by this thug and constant problem in the Iraqi reconstruction.

Al Sadr continues to cause problems for the freedom forces that are in Iraq. He may quiet down a bit as he does each time his forces are getting an ass kicking and his world is closing in on him. Then he calls a truce until he gets things reorganized. Regrettably the DU and liberals in this country along with the communists in Italy, think this is some kind of noble effort that the average Iraqi agrees with. The poor little fooled liberals. It doesn’t occur to them that the signs at the protest are made in Engish just for them and the leftist western media outlets that are all too eager to report this propaganda on front page editions (look for them tomorrow).

This “religious leader” in the black cape is going to continue to be a problem for the US. But then again, so are the western media outfits that report and glorify his “cause”.

Iraq’s new president Jalal Talabani on Sunday restated his support for a continued US military presence in Iraq, one day after large demonstrations by supporters of Shia cleric Moqtada al-Sadr demanded troops from United States and other coalition forces leave the country.

“I think we are in a great need to have American and other allied forces in Iraq until we will be able to rebuild our military forces,” Talabani told the CNN news programme Late Edition, saying he opposed setting a timetable for the US military’s exit from the country.

Let’s see if this makes the headlines!