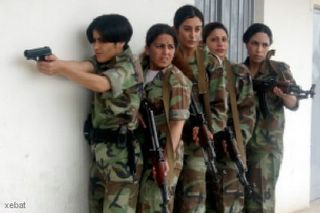 During the Liberation of Iraq a freedom force from Kurdistan known as the Peshmerga helped to secure the northern front. This band of freedom fighters included men and women, many who had lost their husbands or family members during Saddam’s reign of terror and felt compelled to fight against him. Like the men, they were praying for the day of liberation for their people:

If revenge is a dish best served cold, then the fresh-faced recruits of the Peshmerga Force for Women cannot wait for the Kurdish winter to set in. That’s when they believe a US attack on Iraq will happen, allowing them to put into practice all they’ve learned at the training camp for peshmerga – meaning those who face death – outside the Kurdish city of Sulaymaniyah in the self-rule area of northern Iraq.

At the academy, run by the Patriotic Union of Kurdistan, 20 young women are being schooled in the arts of attack, ambush and sabotage, and learning to use Soviet-era weapons. (This was before Operation Iraqi Freedom. Today they are still training women to fight in northern Iraq.) Soon they hope to apply these arts of war against the regime held responsible for the murders and disappearances of their loved ones. 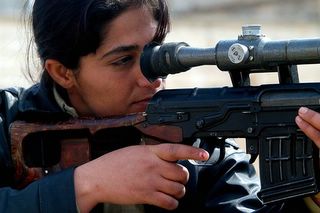 Peshmerga Fighters prayed for the Day of Freedom for Iraq.

“Men get the full force of the dictatorship’s brutality in this country, but women end up suffering the results,” said Shams Mahmoud, a commander of the women’s force, which was established six years ago and now boasts more than 300 fighters.

“There is barely a woman in Iraq whose husband, brother, son or family member has not suffered or been killed at the hands of this regime. My job is to teach them how to look after themselves, and how to fight to liberate this country.” 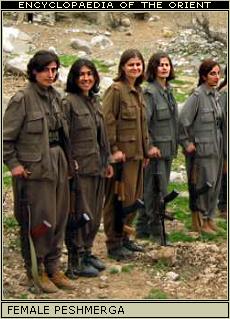 Lining up on the battlefront

The US wanted to disband the fighting group of men and women after the war:

Huddling together for warmth in a mountain outpost last week, these members of the peshmerga couldn’t imagine why their quiet existence in a remote village is causing so much fuss in Baghdad, more than 250 miles south. The men fought bloody battles against Saddam Hussein’s former regime, were the only indigenous force helping the U.S.-led coalition during the war and are heroes to the besieged Kurds they protected… 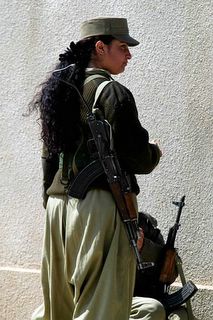 Obviously, there are no hair requirements.

But, reconsidered after the disruption it caused in Kurdistan:

…The U.S.-led coalition and its handpicked Iraqi Governing Council, however, have other ideas. American administrators in Baghdad have repeatedly said paramilitary forces have no place in the new Iraq. After contentious debate, (in 2004) the council last week decided to allow peshmerga to keep their weapons — but only as part of a National Guard-style force. 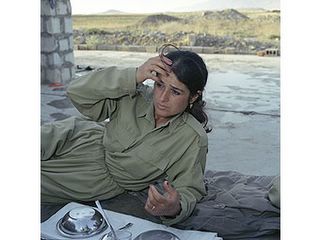 A break in the action.

Peshmerga fighters describe how they would greet George Bush if they ever ran into him:

The officers of a Kurdish guerrilla unit drank tea and laid out in vivid detail what they would do to President Bush if he fell into their hands. “I would kiss him one thousand times,” the company commander, Sheikh Fattah, said. “I would carry him on my shoulders and shout songs to him,” another officer, Farouk Khaled, added. “I would sacrifice one thousand sheep and two thousand chickens for him,” a third officer, Mam Siamand, said. 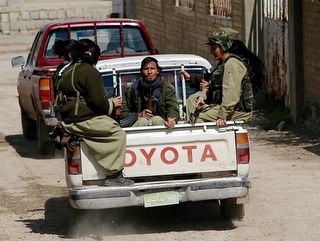 Off to the battle field.