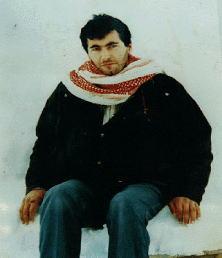 The father of suicide bombings and Palestinian hero, Yihye Ayyash, will have a miniseries in his honor out soon:

A 12-part series on the life of the “father of suicide bombings,” Hamas bomb-maker Yihye Ayyash is set to be aired on the Lebanese-based Hizbullah satellite television station al-Manar.

Ayyash was born in 1966, near Shechem. He studied electrical engineering at Bir Zeit University near Ramallah and joined Hamas shortly afterward. His bombs killed at least 76 Israelis and injured more than 400 before Israeli intelligence succeeded in killing him, using a bomb installed in his cellular phone.

Ayyash is lauded as a hero in the Palestinian Authority and posters featuring his face, with the honorific nickname ‘al-Muhandas’ [the engineer], plaster the walls of many Arab towns in Judea, Samaria and Gaza.

On January 5th, 1996, Israeli security agents succeeded in planting 1.7 ounces of explosives in his cell phone – detonating it after he answered the phone and his voice was confirmed.