**There are now, Almost 40 Hunger Strikers** 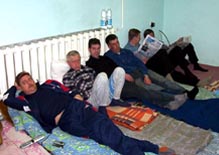 Autuchovich (far left) in his 29th Day of a Hunger Strike.

Today is the 29th day of hunger strike of Mikalay Autukhovich, a businessman from Vaukavysk. His condition is rather poor. Health condition of some other protesters has deteriorated as well. Yesterday one more person joined the hunger strike, a former tax inspecor, Anatol Dzeshka, Radio Svaboda informs. Thus there are almost 40 hunger strikers again.

Mr. Autukhovich is an owner of about 22 taxi cars. He employs taxi drivers of the firm “Nika-trans”, which has been sentenced to a fine of 1 billion 813 million 529 thousand rubles. The authorities believe that the firm is engaged in taxi service without a licence. But M. Autukhovich believes that they had not violated the law, as he and the “Nika-Trans” had signed an agreement about driving the taxis to which the “Nika-Trans” bears no relation. The account of the Nika-Trans is arrested, and its seven trucks stopped the work since the beginning of the new year.

Radio Free Europe is also reporting on the taxi owner:

Some 40 other people, including taxi drivers employed by Autukhovich, have subsequently joined his strike.

Mikalay Autukhovich is conducting the strike to contest the local authorities’ demand that he pay a fine of some 2.1 billion Belarusian rubles (nearly $1 million) for allegedly not possessing a license to provide taxi services and not paying taxes, RFE/RL’s Belarus Service reported.

His veteran brothers have joined him:

Doctor Iosif Kharuk, who examined Autukhovich on 7 April, told RFE/RL that Autukhovich’s condition is serious — due to the hunger strike, the temperature of his body has fallen to 35.7 degrees Celsius, and his blood pressure has significantly lowered. According to the doctor, there is a threat that in the coming days the hunger strike may impair the functions of Autukhovich’s liver, kidney, and brain.

Autukhovich, who is an Afghan war veteran, has been joined in his protest not only by his employees but also former brothers-in-arms from the Afghan war who are not related to his business activity.

He has vowed to continue his hunger strike until he can work peacefully:

“I am forced to do so, as there is almost no hope left that we would be given a possibility to work peacefully. And I will continue my hunger strike until the problem fateful for more than one hundred people would be solved.