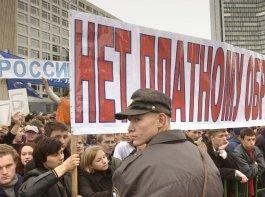 An estimated 3500 students took to the streets of Moscow today to protest changes in education policy:

About 3,500 students are holding a rally in the center of Moscow with the number continuing to swell.

They are protesting against education reforms including the cancellation of military draft exemptions.

The deputy head of the Russian Education Agency, Yevgeny Butko, quoted by Itar-Tass news agency, said the students are demanding transport benefits, an increase in their stipend and an allocation of funds for the summer recess. 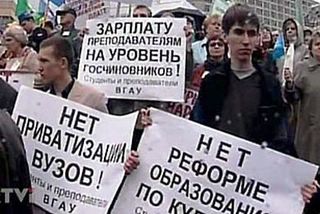 Around 600 policemen, including 100 riot police, are ensuring security in the area where the picket continues. No incidents have been reported.

Meanwhile, a growing number of students have joined the picket. The young people have to go through metal detectors to get to the picket grounds. Most of the pickets are residents of Moscow institutes. The other protesters are members of the Youth organization of Rodina bloc and activists of the National Bolshevik party who are chanting political slogans.