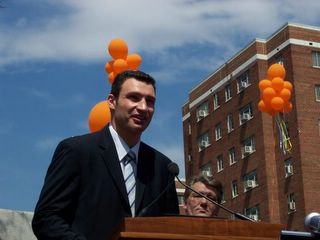 Well, not exactly “sparring” partners… But, a couple of Ukrainian Superstars, none the less, attended a rally at the Shevchenko Monument in Washington D.C. on Wednesday April 6th, 2005.

Publius Pundit and Orange Revolution have more on the event.

While the world knows the story of Viktor Yushchenko and the Orange Revolution in Ukraine, the story of Vitali may be less known unless you follow the sport of boxing (however, I was not aware myself that Vitali ia a doctor and was born in Kyrgyzstan).

Dr. Vitali Vladimirovich Klitschko (born July 19, 1971), known as “Dr. Iron Fist” is the current WBC Heavyweight boxing champion of the world. He was born in Belovodsk, Kyrgyzstan, in the former Soviet Union. His younger brother, Wladimir Klitschko, is also a top Heavyweight contender. Their father was a Soviet Air Force Colonel, and they are ethnically Ukrainian.

Originally a professional kickboxer, Vitali was also a boxer and won the Super Heavyweight Championship at the first World Military Games in Italy in 1995. He began his professional boxing career in 1996, and won almost all of his first fights by knockout in the early rounds, and eventually won the World Boxing Organization World Heavyweight Championship against Herbie Hide by Knockout in the Second Round. He defended his title several times before losing in 1999 to Chris Byrd. Afterwards, Vitali was forced to retire due to an injured rotator cuff. Byrd, in his next fight, was defeated by Wladimir, avenging his elder brother’s defeat. Vitali continued to fight, and on June 21, 2003, he fought Lennox Lewis for the Undisputed Heavyweight Championship of the World. For the first two rounds, Vitali dominated the fight against Lewis who seemed out of shape and tired. In the third round, Lewis landed a grazing 1-2 combo that caused a horrendous cut over Klitschko’s left eye. The next 3 rounds were give and take, and at the end of the 6th round, the scores on all three judges scorecards read 58-56 in favor of Klitschko. Despite the score in Klitschko’s favor, at the end of the round the fight was stopped due to the cut over Klitschko’s eye. Though he lost, he gained many fans and made his name with this performance. On December 6, 2003, Vitali returned to the ring against Kirk Johnson and knocked him out in the 2nd round, reaffirming his place as the number one Heavyweight contender.

Update: This update is dedicated to Athena “Freedom Goddess” at Terrorism Unveiled… in case you’re thinking of “getting into the ring” or “doing some sparring” with “Dr. Iron Fist” here are some stats that may interest you… 6’8″ , heavyweight, with a reach of 79″ ! Go get ’em!