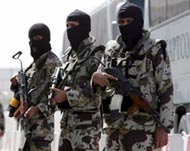 Saudi officials continue to hold the three imprisoned democracy activists for another 20 days so that the prosecuting attorney’s can continue to work on their case against the three.

The trial of Ali al-Dimaini, Abd Allah al-Hamid and Matruk al-Falih, who have been held for more than a year, has been adjourned twice following a similar request by the prosecutor…

…Dimaini, Hamid and Falih were arrested on 16 March, 2004 on charges of demanding a constitutional monarchy in the ultra-conservative kingdom.

The three, whose trial opened last August, are also accused of “using Western terminology” in demanding political reforms. They also allegedly questioned the king’s role as head of the judiciary.

They have repeatedly refused to respond to the charges until the trial is made open to the public but Demaini decided Saturday to present more than 25 pages in his defence, a relative attending the hearing told AFP.