Sheik Saleh Al Luhaiden is the Head of the Supreme Council in Saudi Arabia, the judicial branch of the Kingdom, and a country accused of numerous human rights violations. In public he may stand for prosecution of those who make calls for violence, but in private he is pushing a totally different agenda.

As President Bush held hands with the Saudi Royals in Crawford, Texas this week, NBC came out with a damning video of the Head of the Supreme Council in Saudi Arabia, Sheik Saleh Al Luhaidan. This same Saudi Sheik is the champion of Saudi Judicial Policy in the Kingdom.

And, Maybe it just depends on his audience, but Sheik Saleh Al Luhaidan head of the Supreme Judicial Council in Saudi Arabia is quoted “calling Saudis for martyrdom” and then “calling for the prosecution of those who make a call for martyrdom” less than a month apart from each other. 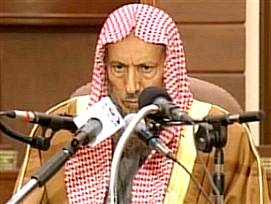 Sheik Saleh Al Luhaidan gave a powerful Sermon in Saudi Arabia last fall. The Saudi Institute has a link to the video clip from NBC News:

In an audiotape secretly recorded at a government mosque last October and obtained by NBC News, Luhaidan encourages young Saudis to go to Iraq to wage war against Americans.

“If someone knows that he is capable of entering Iraq in order to join the fight, and if his intention is to raise up the word of God, then he is free to do so,” says Luhaidan in Arabic on the tape.

He warns Iraq is risky because “evil satellites and drone aircraft” watch the borders. But he says going is religiously permissible.

“The lawfulness of his action is in fighting an enemy who is fighting Muslims and came for war,” says Luhaidan.

The Sheik did show support for the US immediately after 9-11:

The Saudi chief justice, Sheik Saleh bin Muhammad al-Luhaidan, not normally the kind of figure to express public sympathy for the West, condemned the attacks. He added his voice to that of senior royal figures, including King Fahd, Crown Prince Abdullah and Prince Bandar, the Saudi ambassador to Washington.

But,… it is interesting to hear him in this video in October, when he is quoted the next month in November in staunch support of prosecuting teachers and clerics who encourage Saudis to go fight Americans in Iraq:

The head of Saudi Arabia’s Higher Judicial Council wants to prosecute teachers and clerics who encourage Saudi youths to fight against U.S. troops in Iraq.

The Daily Okaz quoted Sheik Saleh al-Luhaidan Luhaidan as warning Saturday against the consequences of issuing statements and religious edicts inciting young Saudis to travel to Iraq to fight against U.S.-led multinational forces.

“The authorities should question and hold accountable the authors of the statements and edicts which make the people feel that fighting in Iraq is a heroic and religiously legitimate act,” Luhaidan said.

He also said donating money to fighters and militants in Iraq at the present time “is only bound to aggravate the situation.”

“We don’t want to repeat in Iraq the same mistakes committed in Afghanistan,” he added.

Some 26 Saudi Sunni scholars and clerics issued an open letter earlier this month to the Iraqi people urging them to resist the “occupation” of Iraq and affirming such actions are legitimate from a religious point of view.

So, did the Sheik have a change of heart?

Also, in October, 2003 the Sheik gave his views on democracy:

Another warning came from the head of the kingdom’s Higher Judiciary Council, Sheikh Saleh bin Mohammad al-Luhaidan, who told the daily Okaz in remarks published Thursday that demonstrations were “demagogic” and authorities were duty-bound to “stand up firmly” to such activities. Calls for demonstrations and sit-ins “amount to calls for strife, and to an attempt to spread vice and undermine security,” he said.

Oh, if you decide to travel to The Kingdom, just to let you know that the Sheik is telling westerners to obey Sharia Law or face the consequences.

The visit of the vice-King of Saudi Arabia to the USA and the warm welcome of President Bush is contradicting GWB call for democracy, anti-terrorist war and calls for changes in the region. Saudi Arabia has not done enough against the terrorism and instead of preventing financial and logistic support of terrorism in Iraq it expressed concerns about democratic state in Iraq. They, instead of giving their Shiites citizen what they deserve of equal treatment, are complaining about free and democratic Iraq. It is the same call which kept Saddam in power after the war of Kuwait in 1991.