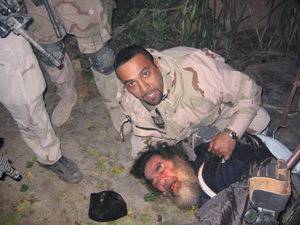 “I punched Saddam in the mouth!”

Iraqi interrogator and St. Louis auto mechanic Samir had the historic privilege of talking Saddam out of his spider-hole. But, few people have heard the story about the “greeting” he gave the ex-dictator back in December, 2003.

“I was so angry,” says Samir, who immigrated to St. Louis eleven years ago after fleeing Iraq. “I began cussing at him, calling him a motherfucker, a son-of-a-bitch — you name it. I told him I was Shiite from the south and was part of the revolution against him in 1991. I said he murdered my uncles and cousins. He imprisoned my father.

“All these years of anger, I couldn’t stop. I tried to say the worst things I could. I told him if he were a real man he would have killed himself. I asked him: ‘Why are you living in that dirty little hole, you bastard? You are a rat. Your father is a rat.'”

In Arabic, Saddam told Samir to shut up. And when Saddam called him a traitor, an enraged Samir silenced his prisoner with a flurry of quick jabs to the face.

“I punched Saddam in the mouth.”

It’s largely because of the photos that Samir insists his last name not be used for this article. He’s afraid that extremists loyal to Saddam, or opposed to the U.S. invasion, will retaliate against him or members of his family who continue to live in Iraq…

Peering into the hole, Samir could make out only part of the man. In Arabic, Samir told the fugitive that if he wanted to live, he needed to get out now. When Samir asked to see the man’s hands, he showed his right hand, and then his left, but he wouldn’t show both at the same time.

“No, I want to see both your hands,” Samir yelled.

Keeping an eye on the man’s hands, Samir plunged into the hole and grabbed the prisoner. Samir says he knew right away that it was the deposed dictator.

“He smelled bad, like a homeless person, and had the long beard and hair, but I knew it was Saddam. I told everyone, ‘It’s Saddam. It’s Saddam!'”

Unconvinced, Special Forces had Samir ask the captive his identity. When the man answered that his name was Saddam, Samir says he shook him by his hair and dirt-matted beard.

Upon hearing that, Samir unleashed years of pent-up rage.

The beating over, Samir tossed his digital camera to a nearby soldier, who quickly snapped a shot of Samir kneeling over the fallen despot…

… Within days of finding its way online, Samir’s photo with Saddam was splashed across newspapers and televisions around the world. In Iraq, the news that the man who captured Saddam was an Iraqi made Samir’s face — if not his name — a well-known image.

For months after returning to St. Louis, Samir kept a low profile. Few people outside the city’s Iraqi community (estimated to be some 3,000 people) knew the identity of the man in the photo…

…It was only last summer — after a friend with connections to the Missouri Republican Party arranged a meeting between Samir and President George W. Bush — that Samir’s story became public.

The meeting, held prior to Bush’s campaign stop at the St. Charles Family Arena last July, lasted just a few minutes. Samir relayed to the president his story of capturing Saddam and presented him a gift of Iraqi beads signifying good luck. Bush told Samir he was immensely proud.

Samir’s boss at the time, Nadir Malik, says Samir was back at work replacing a transmission just hours after meeting the president.