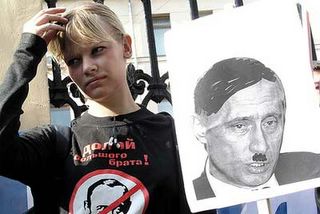 Russians have their own Put-hitler!

Putin speaks to the distrust Russians feel towards government:

There is no mutual trust between Russian citizens and the government.

“People don’t feel a real connection with the authorities and government bodies,” the president claimed.

However, Putin stressed that he does not think that disrespect for the authorities in Russia is genetic. “On a genetic level there is nothing negative in our people,” he went on.

He said that the local government reform, which includes the redistribution of funds in favor of municipalities and the handing over of a number of regional authorities’ duties to local bodies, will be held in a bid to overcome the breakup, restore society’s confidence in the government and make its work more effective.

Putin also pointed out that Russia lacks adequate leaders. “This is a primeval problem of every bureaucratic system. As with money, there are always too few effective managers,” he concluded.

So, what does he mean by that? Is that his way of saying he’s staying a while longer as president? This, after he stated he would not seek re-election in 2008… but maybe in 2012. And, when did he start talking genetics?