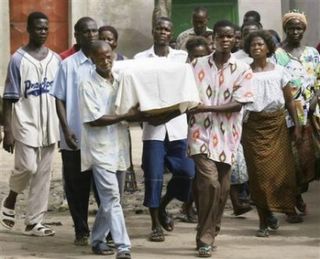 A Cardboard Coffin for a 6-Year-old boy who was shot by pro-government militia men in Togo.

Things appear to be calming down some in Togo but that may be because the Opposition forces with their sticks and slingshots are no match for the pro-government forces with guns. Earlier today there were reports of soldiers beating civilians and forcing them to clean up the streets.

Publius Pundit has a good round up of the events in the last few hours in Togo.