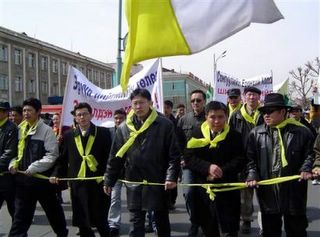 Protesting Against Corruption in Mongolia

Protestors marched outside of the parliament building in Ulan Bator, Mongolia, Thursday April 7, 2005. About 2,000 people staged a peaceful protest Thursday demanding that the government resign and accusing lawmakers of corruption.

A leading Mongolian politician sought to play down fears on Thursday that presidential election campaigns could trigger the same instability that has racked Kyrgyzstan, despite a series of protests in the capital.

Campaigning officially begins on Friday for the May 22 vote, with four candidates contesting for the post in the vast, windswept Central Asian country, once the centre of one of the world’s greatest empires but ruled as a one-party Soviet satellite for much of the last century.

The revolutions sweep east as the protesters say they were inspired by the events in Kyrgyzstan:

It was the second protest in three weeks by activists who say they were inspired in part by events in Kyrgyzstan, where demonstrators forced the Central Asian republic’s president from power.

“This government is a very corrupt government. We demand the government resign,” lawyer J. Batzandan, a leader of the protesters, said as they began a march to Sukhbatar Square in front of parliament.

Carrying signs saying “We demand the government resign,” the marchers stopped 120 meters (500 feet) from the front of the building on the vast plaza. Protests are banned on the square, but police didn’t try to block the march. Only about 20 officers stood guard outside the huge Soviet-style parliament building.

Voting in the grasslands:

Mongolia’s gross domestic product rose 10.9 percent in 2004 from 5.5 percent the previous year as the country rebounds from droughts and famine in 2000 and 2001 and attracts mining investment from the likes of Canadian firm Ivanhoe Mines Ltd.

About half of the population of Mongolia are nomads. 3,800 voting stations that will be set up across the country’s vast grasslands.

Genghis Khan, born around 1167, unified disparate Mongolian tribes to create a lethal, horseback fighting force that rode roughshod over China and Central Asia and forged a short-lived empire that reached as far west as Poland and Hungary.