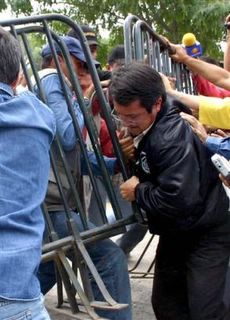 Some Mexicans are upset that charges are being brought against a leftist mayor:

Several small street protests broke out around Mexico City on Sunday in support of the capital’s leftist mayor, a front-runner for the 2006 presidential election who could be jailed within days on minor charges.

The mayor’s case has polarized Mexico and fueled fears of a major political crisis that could damage the economy.

One group of several hundred demonstrators formed a human chain stretching a few blocks, while another group gathered at the Angel of Independence sculpture downtown. Other tiny protests at city plazas and parks were reported by local radio.

The protesters chanted and sang in opposition to Congress’ vote last Thursday to strip mayor Andres Manuel Lopez Obrador of his legal immunity so that he can face contempt of court charges, which they see as a political drive to keep him from becoming president.

“You’re not alone!” read one homemade banner. “No to injustice!” said another.