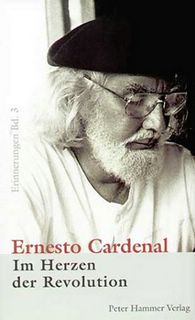 In 1983, Pope John Paul II visited Nicaragua. On his arrival at the airport tarmac, the Pope visibly admonished a Nicaraguan priest who had been waiting to greet him.

This Sandinista priest, Ernesto Cardenal, who was working with the government at that time is now calling the pope’s trip and admonishment an historic error saying Pope John Paul II confused “liberty” with “capitalism”.

The Pope’s early life experiences with communism made him a great opponent to the doctrine that had ruined his home country of Poland.

These battles with communism left John Paul deeply suspicious of Marxist thought. By his lights, that included liberation theology, which tried to bring the concern of Jesus for the poor to bear on the miserable living conditions in Latin America. For John Paul, liberation theologians had borrowed too much from Marxism.

The most famous images of his concern occurred during a visit to Nicaragua, where priests were serving in the cabinet of the Sandinista government. John Paul wanted them out. One of them, Ernesto Cardenal, met him at the airport, and the pope visibly admonished him.

Later, during an outdoor Mass, he angrily silenced Sandinista protests in the crowd.

A less public manifestation of his concern was his treatment of Archbishop Oscar Romero of El Salvador, whose advocacy of the poor against the government and right-wing death squads troubled the pope. When Romero visited Rome, Vatican officials kept him waiting for days. Then John Paul warned him against communism and told him to get along with the government that Romero saw as killing his people. Romero left in tears.

Today Ernesto Cardenal is looked upon as a hero and outstanding Nicaraguan poet:

Cardenal was born on January 20, 1925 in Grenada, Nicaragua. He studied in Mexico and at Columbia University in the U.S., and with Thomas Merton at a Trappist monastery in Kentucky in 1957. Nicaraguan dictactor Anastasio Somoza declared Cardenal an outlaw in 1957 for his support of the Sandinista movement. In 1965, he was ordained a priest and founded a Christian commune, Solentiname. During the revolution, Cardenal served as a field chaplain for the FSLN. After the Triumph, he served as Minister of Culture from 1979 to 1988 and promoted literary workshops throughout Nicaragua. (It looks like it took him a while to take the Pope’s advice.) At present he is the Vice President of Casa de Las Tres Mundos, a literary and cultural organization based in Managua.

Ernesto still hangs on to his Communist beliefs:

Ernesto Cardenal has called Pope John Paul II’s trip to Nicaragua an “historic error,” saying the visit was marked by a lack of historical understanding of Nicaragua and the processes at work in Latin America.

Cardenal, a former Trappist monk who served as culture minister in the Sandinista government, took issue with the Pope’s claim that Nicaragua had become a “freer country” since the prelate’s 1983 visit. Cardenal argued that the Pope had confused liberty with capitalism.

“One could respond that now there are students beaten by the police and some have even been assassinated,” Cardinal said. “During the 10 years of Sandinista government, the police never used tear gas against the people, not even once.” 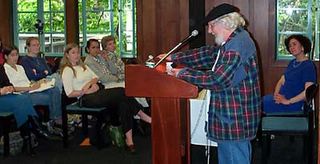 Lecturing at University of California, Berkeley

This of course has garnered him many awards and glorious praise from American universities:

He has always considered poetry as a powerful agent for constructive social change and his poetry gives voice to the voiceless, speaking out against oppression. “Choice” magazine calls Cardenal “one of the world’s major poets” who “struggles to convince himself that the underlying force in the universe is divine purpose rather than pure chance. For him, the politics of commitment is essential to the poetic discourse, just as love, the ultimate cohesive principle, is necessary to preserve the oneness of creation.

Years after the Pope’s arrival on the tarmac in Nicaragua, Father Ernesto Cardenal is still preaching Marxism.