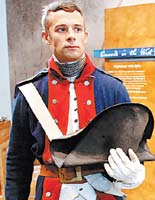 So what is Lewis to do when Clark wants to spend his time partying at celebrations?

Two hundred years ago, the pair known as Lewis and Clark toughed it out together for 8,000 miles. But a St. Charles group’s modern-day re-enactment of that fabled journey made it just 1,000 miles, to the middle of North Dakota, before the man portraying Meriwether Lewis quit and set out on his own.

Lewis and Clark have split up. To a point.

Scott Mandrell, a teacher from Alton who has played Lewis since the trip began in August 2003, left the group over differences about how to proceed. He felt that the group’s frequent stops at celebrations and educational events along the route distracted from the goal of faithfully retracing the western expedition, as detailed in the original pair’s journals.

Once the re-enactors made their way up the Missouri River, they were confronted with opposition from Indian groups accusing them of celebrating the killing of Indians. Many of the differences have since been ironed out.

The most important thing is being on the river, said Mandrell, who has continued updating his journey for a school-based program.

It has not been an easy trek up stream.

The explorers were first confronted by hostile indians in late September:

“It did nothing good for us. They are saying how great is and we know that is not true,” Alex White Plume, a Lakota Sioux from the Pine Ridge Reservation, told the Native American Times. 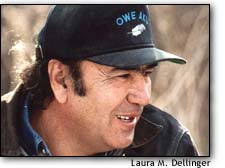 White Plume got the notice of authorities for the potential “white plumes” from his industrialized hemp crop blowing in the reservation wind.

In September an Indian Rights Group from San Francisco, “IndyBay”, confronted the actors in period dress:

“You are re-enacting genocide.” Deb White Plume of Pine Ridge gave the expedition a symbolic blanket of small pox. Another Lakota woman from Pine Ridge said she carries the DNA of the Lakota women who survived the slaughters that Lewis and Clark opened the door to. She said she is prepared to die for this cause. “I believe in armed struggle,” Wicahpi Wakia Wi of Pine Ridge said. “The act of genocide stops here. We are tired of living poor. We are not afraid to die. I am willing to die.” She told them they would not proceed up the river. “You are not going on. I will organize every sister from here to Oregon to stop you.”

So Meriwether Lewis trudges on into the unknown. What new hostilites must he face? Only time will tell.