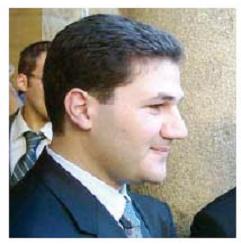 Army troops and riot police made repeated baton charges to stop irate families and relatives of Lebanese prisoners in Syria from storming into the Lebanese parliament as it opened a vote of confidence debate in Lebanon’s new government Tuesday.

Screaming protestors were clubbed down to the ground at downtown Beirut’s Star Square of the parliament building as the clash flared into a fist fight and troops used rifle butts to subdue the demonstrators.

Waving national flags and banners of Samir Geagea’s Lebanese Forces and Gen. Aoun’s Free Patriotic Movement, the demonstrators marched onto Star Square from the premises of the U.N. House, where they have been staging a sit-in since Sunday.

Nadim Gemayel, son of slain LF founder President-Elect Bashir Gemayel, who led the march, was roughed up during the 20-minute confrontation and was seen on TV screens shielding his face from club-wielding riot police.

Nadim has some very big shoes to fill and some great expectations placed upon him:

In 1975, when Bashir (Nadim’s father) began his political and military venture, the Christians and Lebanon were under Syrian and Palestinian constant bombardment. These attacks threatened the survival of the Christians and the existence of the Lebanese State.

Ordinary people were being kidnapped, raped, and killed and their fortunes and livelihoods were being destroyed on a daily basis. Accordingly, the entire Christian community stood behind the Kataeb Party, and in one way or another, backed Bashir who was leading the resistance from within the Kataeb/LF. He was head of the Kataeb Security Council, (El-Majlis El-Harby) and Vice President of the Kataeb Ashrafieh District. Later on, after the liberation war of Tel Zaatar, he was appointed to lead the newly created Lebanese Forces, which became the Kataeb military arm.

Bashir’s position earned him the full support of Sheik Pierre Gemayel and the Kataeb Party, as well as the utmost backing of the Lebanese Front. Afterward, when Bashir launched his political career, he had already succeeded in many military victories, which proved his trustworthiness as well as his leadership skills. Therefore, opposing Bashir at that time meant opposing the entire Christian community and the sovereignty of Lebanon.

In today’s Nadim’s case, the situation is much different. Despite the Syrian’s grip over Lebanon, many do not believe that Lebanon’s existence is threatened, (at least it doesn’t appear that way to ordinary people.) Furthermore, despite the oppression imposed by their Syrian/Lebanese Mokhabarat, the Lebanese cities and towns are not being bombed by the Syrian and Palestinian artilleries. Moreover, the Christians are not being kidnapped, raped, or killed in broad light situations.

Therefore, as a community, the Christians do not sense a clear and present danger. In fact, many Christians feel safe and protected, while the threat against the rest is related to their political affiliation instead of their religious one. Therefore, the Christians deem the situation acceptable since it does not constitute a threat, which requires harmony and collective measures for resistance. Hence, their unity is absent and the need to support a leader like Nadim is considered unnecessary.