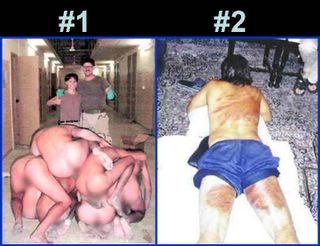 “Naked Pyramid” or “Take Your Lashes”?

#1 This first option is from, of course, the most gruesome act of cruelty the world has ever witnessed at the hands of the occupying American forces at Abu Ghraib Prison in Iraq.

#2 This second option is a picture of a 17 year old boy after taking his lashings in Iran.

I received an anonymous comment earlier this week to a posting I had put together titled, “14,200 Lashes” . This is what was said:

“I think that victims of Saudi torture would probably beg for “naked pyramid” as an alternative.”

I could not agree more!

Oh, and yes, I am not promoting the actions taken at Abu Ghraib.