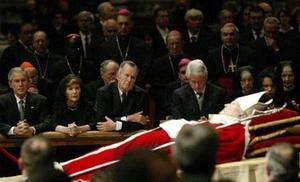 President Bush visited St. Peter’s Cathedral today in Rome to pay respects to Pope John Paul II. The administration was offered five official slots so it came down to GW, Laura, George Sr., Bill and Condoleezza. (I am wondering if any feelings were hurt?) President Bush will be the first sitting president to attend a papal funeral.

His would be assassin’s brother is attending the funeral.

The brother of Mehmet Ali Agca, the Turkish gunman who shot and seriously wounded Pope John Paul II in 1981, plans to attend the pontiff’s funeral, the gunman’s lawyer said Wednesday.

And, the girl who saved the pope’s life is now talking about that day.