"Hamas Founder" on the Big Screen 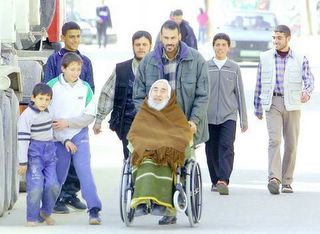 Hamas Founder Sheikh Ahmed Yassin in a theater near you!

Famous arab actor and film maker Nour al-Sharif is planning on making a film on the founder of Hamas, the Palestinian terrorist group:

Prominent Egyptian actor and director Nour al-Sharif, who specializes in presenting the life stories of Arab and Muslim leaders, has begun working on a film depicting the life of slain Hamas leader Ahmed Yassin…

…”The September 11 attacks [in New York and Washington] have paved the way for Israel and US to influence even Arab artists,” he charged. “My fear is that I would not be able to complete the project if the superpowers are unhappy with it.”

“This will be a narrative film about the life of Sheikh Ahmed Yassin, and not propaganda,” the actor explained. “We must learn from the Americans how to turn their ideas and values into films. This is what the Arab world is lacking.”

Sheikh Ahmed Ismail Yassin Yemach was the leader of Hamas until he was killed by an Israeli helicopter gunship. Yassin co-founded Hamas with Abdel Aziz al-Rantissi in 1987, originally calling it the Palestinian Wing of the Muslim Brotherhood. In addition to being nearly blind, he was a quadriplegic and was confined to a wheelchair after a sports accident in his youth. Despite his paralysis, he fathered 12 children.

Actually, it would be a fascinating story. But, I am afraid that this innocent looking man would be made into some kind of a victim which would be revolting to the real victims of Hamas terrorism.