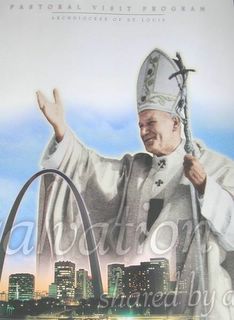 A Man for All Seasons

In 1979, Pope John Paul II came to the United States. And, of all the magnificent places he could choose to visit, he decided to visit “Living History Farms” in Iowa. I was a high school student at the time of his visit and was fortunate to see him when he visited the state. I searched today for photos of his stop in Iowa and was disappointed to find only a couple of black and whites with him greeted by then, Governor Ray. A pity because the magnificence of a harvest sun shining down on a stage of orange and yellow mums in an open field was unforgettable.

As I was talking with my twin brother today, I was reminded of what kind of day it really was back in the fall of 1979. He reminded me that it was cold and overcast but as the pope’s helicopter approached the site, it was as if the clouds parted and the sun beamed down on the open field where the thousands of Catholics had congregated. It was a beautiful site and one I have not forgotten. And, the pride I felt being from a midwestern farm state was just wonderful. You see, my family came from modest people… farmers, country store owners, and railroad station operators; people who worked hard, raised large families and lived good, decent lives. It felt so wonderful to feel like we mattered. It felt wonderful to feel like I mattered. I believe that John Paul II gifted many people in this way many different times.

In January of 1999 Pope John II came to St. Louis where I live. A friend of mine signed us up to work at the Papal Mass at the then TWA Dome. It was January in St. Louis so there was no guarantee what the weather would be like. So, the story is that the “Pink Nuns” , were going to pray for good weather. The “Pink Nuns” are

…a cloistered-comtemplative missionary Congregation, living in community, whose members are entirely dedicated to the contemplative life in the service of perpetual adoration of the Blessed Sacrament.

So what happened the day the Pontiff arrived? The weather was 60 degrees and sunny in late January in St. Louis! I remember standing at my post as the procession began for the service and seeing the “Pink Nuns” march as a group into the stadium (mind you this is a group of cloistered nuns who rarely, if ever, leave the convent). I just simply cannot forget the standing ovation and cheers they got when they walked into the stadium for that mass. It was a remarkable moment. 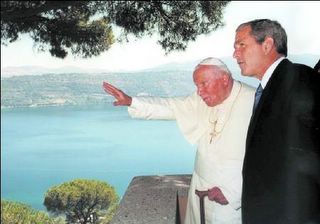 Meeting with The People

I will miss this man, Pope John Paul II. You were a great example for me. I thank God for your twenty-six years of leadership. And, I am one of the millions who will miss you very much. You had that rare gift of making everyone feel special. And you were the one who led the world into the twenty-first century. Your life, Your Story, Your legend, will live on. You were here for all of us when we needed a strong moral leader. Coincidence… I think not.