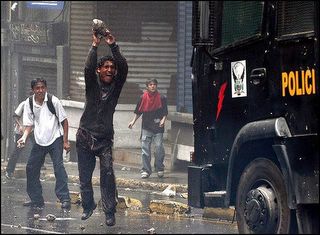 Protesters Clashed with Police on Tuesday

Police and protesters clashed on Tuesday in Quito the capital of Ecuador:

Ecuadorean police fired tear gas at tens of thousands of protesters marching on the presidential palace in Quito, the capital, to demand the resignation of President Lucio Gutierrez.

Demonstrators, who had been peaceful, responded to the tear gas by throwing stones at police.

A 70-year-old man who had a heart attack after being gassed became the first to die in a week of protests against Gutierrez for interfering with the Supreme Court.

The president has refused to step down.

”El Loco” is frank and often crude. He eats his food with a spoon and says he admires lesbians because they love the most beautiful creatures on Earth: women. He compares himself to boxer Mike Tyson and boasts that he can knock down political challengers with his tongue alone.

Bucaram returned to Ecuador earlier this month after a controversial Supreme Court ruling cleared him of corruption charges. Since Congress ousted him for ”mental incompetence” in 1997, there have been allegations that he left the presidential palace with suitcases of cash.

His return confirmed for many what they already suspected: He brokered a deal with Gutiérrez to secure his freedom. Gutiérrez and his allies in Congress put the court that freed Bucaram in place in December, after Congress fired 27 of 31 magistrates and replaced them with their own handpicked judges.

Bucaram, who has fled Ecuador on three occasions because of criminal proceedings against him, compared his trials to those of Jesus and Socrates, and said he was not afraid that a new Supreme Court might take up his case again.

”They’ve accused me of being a guerrilla, a [drug] trafficker, a thief,” he said. “The only thing they haven’t accused me of is being a [homosexual] because they know of my natural predilection for women’s legs.”

While he was in office, Bucaram was known as a partyer who invited Lorena Bobbitt, the Ecuadorean-born woman famous for cutting off her husband’s penis, to lunch at the presidential palace. But he was as apt to express his admiration for Adolf Hitler’s book, Mein Kampf, as he was his admiration for women. He even had a Hitler-like mustache he said his wife thought made him sexy.

Officials are blaming a radio station for all of the protests!

Military police used tear gas and high-pressure water hoses to restrain tens of thousands of protesters Tuesday night during the fiercest confrontation yet between the government and those demanding the ouster of president Lucio Gutierrez.

As police tried to quell the escalating unrest, in which several people were reportedly injured, officials today cast the blame on an unusual source: a local radio station that has directed the public to an estimated 200 demonstrations in the past six days.