Eleven deaths have now been officially reported in clashes between the ruling party and opposition forces in Togo in the aftermath of the disputed Sunday election. Gunshot victims are reported in the capital city of Lome and also in Be. Opposition Leader Gilchrist Olympio is calling for new elections:

Clashes that followed the announcement of Togo’s presidential election results left at least 11 people dead and 95 hurt, hospital sources said as violence resumed in the capital.

An official at Lome’s main Tokoin hospital, where the 11 died, said two of the injured had been shot in the head and were in serious condition.

“Of the 95 wounded, 90 percent were hit by bullets,” one source said Wednesday.

Doctors at the hospital said they were “overwhelmed” and lacked the resources to deal with the situation, despite a small amount of aid provided by the Red Cross.

An AFP reporter saw a man brought into the hospital with a bullet wound in the hip, as clashes broke out again Wednesday in the opposition stronghold of Be.

Witnesses said security forces had fired live rounds as well as teargas in fighting with opposition supporters who rejected the announcement Tuesday that Faure Gnassingbe, candidate of the ruling party, had won the April 24 elections. 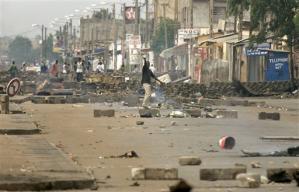 Looting & Violence Leave Destruction in the Streets of Togo

Violence continues in Togo as Opposition supporters rush to the streets to denounce the presidential election results:

Opposition supporters are clashing with security forces on the streets of the capital, Lome, after the former leader’s son was elected president.

Security forces used teargas on militants who erected and burnt barricades for a second day running.

On Tuesday evening Acting Interior Minister Katari Foli-Bazi issued a warning that all street gatherings were banned and that opposition leaders would be held personally responsible for the actions of their followers.

The opposition rejected the results, despite reconciliatory overtures by Mr Faure.

“We call on the people to resist,” said UFC secretary-general Jean-Pierre Fabre.

Earlier, Mr Olympio said his party would not serve as a minority partner in any unity government.

Mr Olympio was ineligible to stand in the poll because he lives in exile following a 1992 assassination attempt.

The International Committee of the Red Cross said at least 70 wounded were treated on Tuesday at Lome’s main hospital and many had been shot. One Lome resident said he saw the bodies of two people who had been shot dead outside his house.

There were no immediate official details of casualties.

Human Rights abuses have been reported for years:

Togo, a narrow strip of land on Africa’s west coast, has for years been the target of criticism over its human rights record and political governance.
Togo formed part of the Slave Coast, from where captives were shipped abroad by European slavers during the 17th century. In 1884 it became the German protectorate of Togoland.

It was seized by Britain and France at the start of World War I, divided and administered under League of Nations mandates.

The British-ruled western part was later incorporated into what is now Ghana.

UN Secretary-General Kofi Annan appealed for calm in Togo, where violence erupted in the streets on Tuesday after the son of the former long time ruler won the African country’s latest election.

“The secretary-general reiterates his urgent appeal for calm and calls upon the various political leaders and their supporters to refrain from any actions or statements that incite further violence or promote hatred and divisions in the country,” his spokesperson said in a statement.

“He also calls on the security forces to exercise similar restraint,” the statement said, referring to Tuesday’s clashes as well as violence after the voting on Sunday.

For more information on Togo go here, here, or here.
Publius Pundit also has some great postings on the situation in Togo.

Update: (9:00 AM) The “Great One” Instapundit has linked to this latest on the Togo tragedy.

Also, new reports are giving a better picture of the escalating violence and death:

Opposition supporters protesting the presidential election victory by the son of Togo’s longtime dictator threw Molotov cocktails and rocks during street clashes with security forces in the capital Wednesday, leaving at least six people dead and some foreign embassies damaged.

Update: (3:30 PM) From AFP- At least 22 people have been killed and more than 100 people hurt in clashes here between opposition supporters and security forces after the ruling party candidate was declared winner of Togo’s disputed presidential poll, officials said.

And the BBC says that the opposisiton is claiming victory.