**Reports of Violence, Death and Destruction in the Aftermath of Togo’s Presidential Election**

Publius Pundit also has a very thorough post up yesterday on the situation in Togo.

Reports are starting to trickle in now about the situation in Togo in the aftermath of a controversial election. Three deaths have been reported:

At least three people were killed and 13 others were injured in Togo as voting ended in tense presidential elections marred by claims of massive fraud.

A Western diplomat told AFP he “saw three bodies in the district between John Paul II boulevard and the airport near the Hedzranawoe primary school around 1800 GMT”.

“They were the bodies of young men,” he added.

The violence came after voters in Togo turned out in force Sunday to elect a successor to Gnassingbe Eyadema, hardline ruler for 38 years, with both opposition and the ruling parties trading accusations of “massive fraud”.

Voters had a choice essentially between Faure Gnassingbe, the son of the late leader, and his main challenger Emmanuel Akitani Bob, 74, who represents a radical opposition coalition led by Gilchrist Olympio’s Union of Forces for Change (UFC).

Accusations of great voter fraud are coming from both parties:

On Sunday both sides accused each other of rigging the ballot boxes.

The opposition claimed the presidential polls had been rigged in favour of the late leader’s son.

“The stuffing of ballot boxes is occurring on a large scale and we haven’t heard of a single polling station where everything is going well,” Akitani Bob told AFP, charging that forged votes were cast and that ink used to mark voters’ fingers was not indelible.

“This throws the validity of the election into doubt,” he said.

“Gangs of youths chased our delegates in certain voting stations. They took over the polling stations and stuffed the ballot boxes,” Dama Dramani, the party’s secretary general told a news conference.

He said that the polls had been “tarnished by violence perpetrated by these youths of the opposition”. 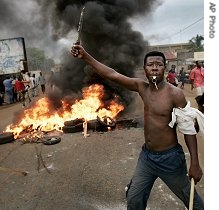 Burning a Roadside Block in Togo.

Government forces are accused of firing on crowds:

At a hospital in Lome’s opposition stronghold of Be, a doctor said 12 people were injured in the violence. Four of them were seriously hurt and taken to another hospital.

The injured told AFP they had been wounded by army gunfire as troops tried to carry away ballot boxes from some polling stations.

These reports could not immediately be confirmed by other sources.

The Authorities are urging for calm:

Violence has broken out immediately after voting in controversial presidential elections in the West African state of Togo, with opposition activists saying police killed at least one protester. Authorities and the regional grouping, ECOWAS, are appealing urgently for calm.

While shots could be heard in Lome late Sunday, authorities read a statement on television banning all public demonstrations.

Police could be seen beating youths with wooden clubs, while army soldiers rode around pointing their weapons from open vehicles, and chasing after thousands of people running around.

The unrest started just after the closing of polls, in which the opposition alleged there was widespread fraud. During the day, opposition activists burned one car, which they said carried stolen ballot papers. They also alleged there had been massive ballot box stuffing, and that newly registered voters were prevented from voting in opposition strongholds.

Update: (6:25 AM) The Great Instapundit is tracking the story and has a link to this posting. And, Robert Mayer at Publius Pundit has another great post to follow up his thorough account from yesterday.

Update 2: (1:00 PM) Seeing the severity of the situation facing the country, the two main political parties in Togo met today and agreed that there would be a ‘unity” government formed, from Reuters:

“They agreed that whoever wins will forge ahead with a government of national unity which will make everybody have a stake in the government,” Obasanjo said after talks with Togo’s ruling party candidate Faure Gnassingbe and the main opposition leader. The elections took place on Sunday.