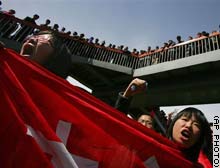 Today more protesters took to the streets in another Chinese city to urge a boycott of Japanese products. The rally was called “spontaneous by the authorities:

About 3,000 protesters were marching towards the Japanese Consulate General in the southern Chinese city of Guangzhou on Sunday, officials and Hong Kong media said, just a day after an anti-Japanese demonstration in the capital turned violent.

The “spontaneous demonstration” was peaceful and police were maintaining order, said a spokesman with the Guangzhou municipal government who refused to give his name when reached by telephone.

AFP World News agency is reporting rallies in two cities with up to 20,000 protesters causing extensive damage to Japanese establishments:

Shouting slogans and waving banners demanding Japan face up to its wartime past, around 10,000 people gathered outside the Japanese consulate in Guangzhou, the capital of Guangdong province, said Japanese embassy spokesman Keiji Ide.

“More and more people are gathering. They are shouting and starting to throw stones,” Ide said.

He said another 10,000 people gathered outside a Japanese supermarket named Jusco in the nearby city of Shenzhen, just north of Hong Kong.

A diplomat at the consulate general in Guangzhou said about 500 police officers were dispatched to the scene and protestors burned Japanese flags made of paper. At least one window of the consulate was smashed, he said.

A witness said several protesters managed to get inside the upscale Garden Hotel in Guangzhou, where the consulate is located.