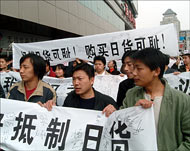 This is interesting… in a society that lacks in personal freedom’s of expression a group of Chinese were allowed to protest Japanese interests and to march all the way to the Japanese Embassy in Beijing.

Thousands of Chinese smashed windows and threw rocks at Japanese establishments in Beijing in protest against Japan’s wartime past and its bid for a UN Security Council seat.

Protesters on Saturday pushed their way through a paramilitary police cordon to the gates of the ambassador’s residence, shouting “Japanese pig come out”.

…Protesters also attacked a Bank of Tokyo-Mitsubishi branch and smashed windows before police moved in.

Another group outside the embassy in southeast Beijing threw stones and plastic water bottles smashing windows in the compound. Some demonstrators scuffled with police.

But the protesters were not allowed to march to Tiananmen Square:

Earlier, a crowd of about 1000 protesters was turned away from marching to the political heart of Beijing, Tiananmen Square, where a pro-democracy student protest was crushed with massive loss of life in 1989.

The official Xinhua news agency put the number of protesters early in the day at more than 10,000.

Large-scale protests are rare in China, where the Communist leadership is concerned about maintaining stability at a time of social change and a widening gap between rich and poor. 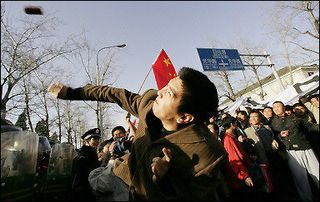 Outside the Japanese Embassy

Tensions High in the Two Countries:

Japan ignited a fresh row with China on Tuesday by authorizing for school use a nationalist-written history textbook that Beijing says glosses over Japanese wartime atrocities.

The Asian neighbors have increasingly been at loggerheads over Japan’s bloody World War II occupation of China and a dispute over scarce energy resources.