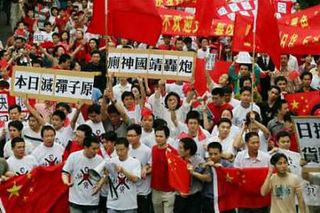 Japan and China are Exchanging Blame for the Protests this weekend in China:

China called on Japan on Monday to do more to repair soured relations between the Asian powers, as a government wary of popular protest kept riot police on guard after violent anti-Japanese demonstrations at the weekend.

Japan in turn demanded that China protect Japanese firms and expatriates but said the best way to resolve the bilateral tensions was through dialogue.

Thousands took to the streets in Beijing, Chengdu, Guangzhou and Shenzhen at the weekend in an eruption of anger at what many Chinese see as Tokyo’s whitewashing of World War II atrocities and its bid for a permanent seat on the U.N. Security Council.

China says Japan is responsible for escalating tensions between the two former rivals after a weekend where tens of thousands of angry Chinese took to the streets.

The flare-up is the latest in tense relations between the heavyweight Asian neighbors. It was triggered in part by a new Japanese history book that protesters say fails to admit the extent of Japan’s World War II atrocities.

Reuters has a video of the protests here.